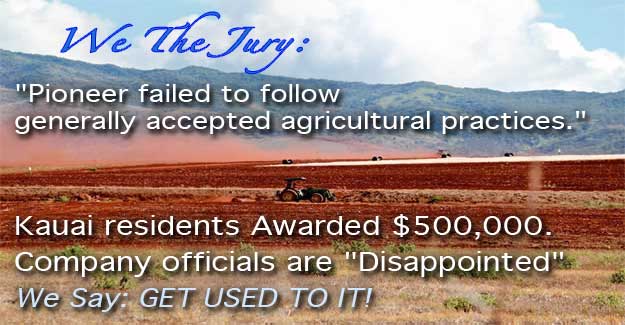 Get used to disappointment Dupont/Pioneer, Monsanto, Dow and all the others: This is just the beginning of the people fighting back against Big Ag’s illegal exploitation of Hawaii’s land and people.

To paraphrase the jury: Pioneer failed to follow generally accepted agricultural and management practices.   Pioneer’s farming operation was the legal cause of damage, significantly interfering with Waimea residents’ use and enjoyment of their property.

Company officials are “disappointed”.   Screw them! They knew what they were doing and are criminals. Pioneer has done and is doing worse. This is just the beginning of the people fighting back.

A federal court jury awarded a total of $507,090 in damages to 15 Wai­mea residents who say they can’t enjoy their homes because of red dust from test fields operated by DuPont Pioneer on Kauai.

The average settlement per person awarded damages was $33,806 per person or $56,343 per household. Only 10 households took part in the trial portion, and the judgements awarded will be used in negotiations for a mass settlement for over 150 people and could total over $5 Million. Though it does not address the health and environmental impacts, which are our greatest concerns, today is a huge victory in the courts for all the people of Hawaii in Kauai, Maui, Molokai and Oahu who are affected by the chemical test fields. This is the first class action lawsuit against the chemical companies regarding the pesticide dust and we doubt it will be the last. Expect an appeal from the DuPont/Pioneer legal team who spent some of the case having giggling exchanges and cracking quiet jokes to each other in the courtroom.
After a four-week trial, the seven-member jury reached its verdict Friday: $191,315 for property damage and $315,775 for loss of use and enjoyment of property.
The residents filed lawsuits in 2011 and 2012 against the seed company formerly called Pioneer Hi-Bred International Inc. in state court on Kauai, claiming the red dust from the company’s Wai­mea Research Center field caused extensive damage to their properties, but both cases were moved to federal court in Hono­lulu.

After the verdict, residents’ attorney Patrick Kyle Smith said he was elated for his clients. “We hope it makes things better in Wai­mea,” said Smith outside the courtroom.

DuPont Pioneer’s attorney, Clem­ent Glynn, declined to comment on the verdict. But in an emailed statement, DuPont Pioneer spokes­woman Laurie Yoshida said company officials are disappointed in the verdict and will evaluate their options in the coming days.