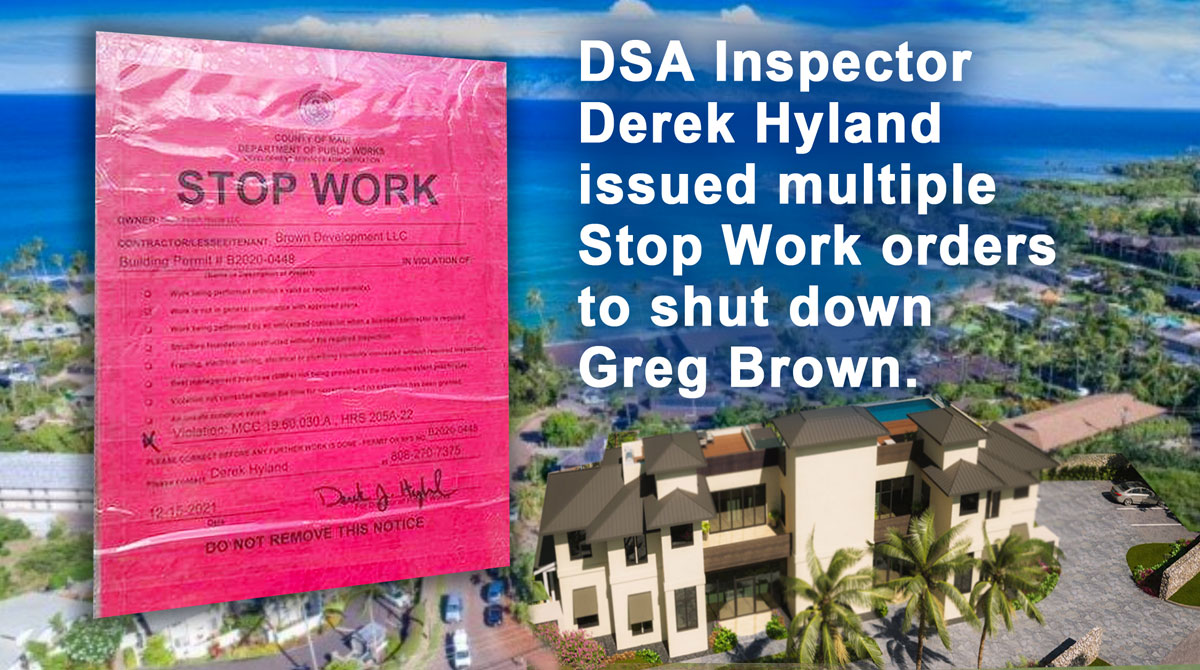 Eight months after Chris Salem first notified Mayor Victorino of Greg Brown’s violations and six months after Mr. Salem was terminated as retribution for responding to community complaints and pressing the matter within the administration, Greg Brown has finally been ordered to stop all work on his Napili Bay “Hotel”.

Today’s Stop Work orders were signed by DSA Supervising Inspector Derek Hyland after protracted internal battles between Public Works, Planning, and Corporation Counsel that have resulted in several resignations of high-level, long-standing Planning Dept staff who were directly involved with wrongfully issuing Mr. Brown an SMA permit exemption and approving building plans that were, from the beginning, in violation of existing County code.

Back In June, inspector Hyland affirmed Mr. Brown’s violations which Mr. Salem, Junya Nakao, and Maui Causes first documented to Planning Director McLean at a public meeting we collectively called for at the site on May 10th.

It is primarily because of Inspector Hyland’s insistence that the County abide by both professional standards and our established ordinances that today’s Stop Work orders were issued.

Mayor Victorino and his Department heads have done everything in their power, from wrongfully terminating Mr. Salem, to lying in Council testimony, to the manufacturing of false government records, and violating state laws, wasting an enormous amount of county resources, to try to protect Greg Brown from what he deserves – being forced to tear his monstrosity down and restore the property to its original condition, all at his own expense.

Ironically, their resistance has brought to light several other developments where Inspector Hyland has discovered the same kind of protective favoritism of code violations actively at play among the same cast of characters.

Among them is the subdivision just up the road from Mr. Brown’s debacle, on Hui Rd E. In 2019 Mayor Victorino signed a written agreement with Mr. Salem to have another SMA permit violation notice issued to the developer there. In a complete about-face, and in violation of his signed agreement, the Mayor and his Department heads have manufactured every illegitimate excuse they can to protect the developer’s interests at the public’s expense. Just like at Mr. Brown’s.

Maui Causes has for years been informing the FBI about these illegitimate acts within the County Administration but with no evidence of direct financial gain by County employees, they had no way to pursue it. Now, the recent resignations of several key County players in this manipulation shine a light on where to look for that proof.

There continue to be some very simple legislative changes that only the County Council can make, which will plug the loopholes that allow fraud by licensed professionals to go unnoticed and be protected by a small group of corrupt administrative staff.

Typically, as in Mr. Brown’s case, SMA permit applications fraudulently stamped by licensed professionals are used to deny the public of our rights to give input into local development and allow developers to avoid paying for environmental protections.

Maui Causes will continue to offer the Council a roadmap to those changes and we believe it safe to say that Inspector Hyland will be more than happy to provide insight and a professional best-practices perspective to the Council as well.

For his part, Mr. Salem is not just a well-loved and respected basketball coach and west-side community leader. Mr. Salem deserves to be recognized for the enormous contributions he continues to make to help clean out corruption and legitimatize the land development process across all of Maui County.

As a whistleblower, Mr. Salem has brought enormous financial recovery to the County; on the 40-year, Three-lot Deferral Agreement scam, the 2015 Upcountry Water Bill scam, failure to pay Park Fees, and others, all perpetrated by Corporation Counsel.

Mr. Salem’s expertise is extensive and is a direct result of the harm that he and his family have suffered by being on the wrong side of the same favored developers and consultants who Mayor Victorino and his team are desperately trying to protect.