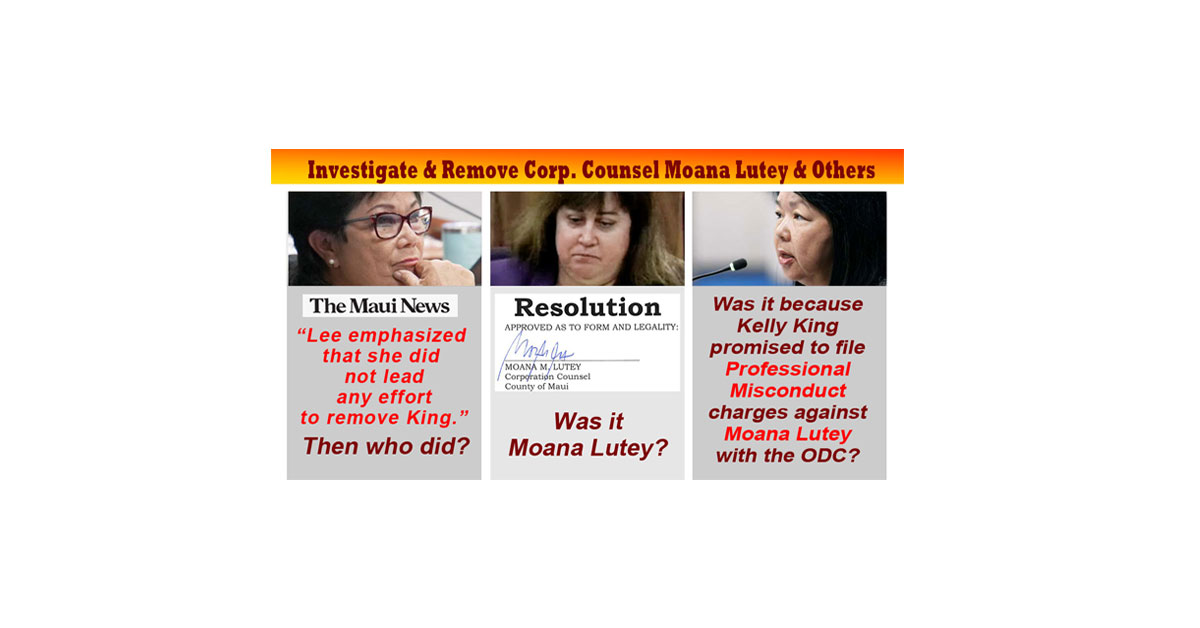 Sign our petition calling for a criminal investigation into Corporation Counsel Moana Lutey and others. Councilmember Alice Lee told the Maui News that she did not lead the effort to remove Kelly King as Council Chair.

No other Council Member was listed as the author of the resolution to remove Kelly King as Council Chair.
Only Moana Lutey’s name is associated with the resolution.

Why would Moana Lutey want to see Kelly King removed as Council Chair?

Maybe it’s because Kelly King promised to file charges with the Hawaii State Supreme Court’s Office of Disciplinary Counsel against Moana Lutey for Professional Misconduct over Lutey’s choice to ignore the County Council’s vote to withdraw the Injection Well case and instead represent to the Supreme Court only the Mayor’s opinion.

Regardless of what side of the Injection Well debate the Council Members may be, they all have a responsibility to uphold the Council’s legitimate vote.

Lawyers at Council Services stated that Moana Lutey and Mayor Victorino are overreaching in their opinion of the Mayor’s authority to override the Council’s vote.

Members who voted against the County Council securing its own legal representative to contest Moana Lutey and the Mayor have sold out the citizens in favor of off-island financial and political interests.  Their misrepresentation sets a new precedent that will have lasting negative impacts on the Council’s ability to represent the people’s best interests.

Sign the petition to investigate and remove Corporation Counsel Moana Lute, who after 20 years of serving special interests is so professionally compromised that she can no longer possibly serve the public’s best interests.

Take control of Maui County back from the lawyers!