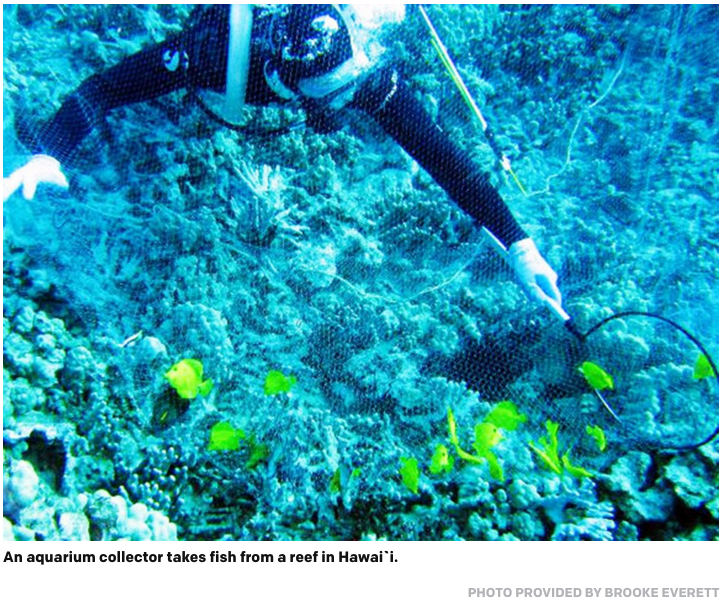 Slapping WESTPAC, that “greenwashing” group The Nature Conservancy, and Gov Ige in their respective faces, Hawaii’s Supreme Court just unanimously agreed that “DLNR’s practice of blindly doling out aquarium collection permits without studying environmental impacts is illegal,” said Earthjustice attorney Summer Kupau-Odo in a press release.  “The law demands and Hawaiʻi’s people have every right to expect more from the agency charged with conserving our natural resources.”

And we have more to expect from both Gov Ige and Collenne Hanabusa who have both shown how truly dedicated they are to preserving Corporate Entitlements regardless of the loss to our communities. Hanbusa pushed for and Ige took the bait when he vetoed Senate Bill 1240, which the legislature recently approved, trying at least to do right by our dwindling natural resources.

The state Attorney General’s office is reviewing the decision to determine what action the state will take in light of the ruling. “Today’s ruling from the Hawaii Supreme Court reverses all lower court decisions since 2012 and more than 60 years of previously unchallenged practice by the Department of Land and Natural Resources,” Attorney General Doug Chin said in a statement.

And it’s about time.

U. Hawaii law professor David Callies revealed a stunning statistic back in 2012. He noted that the Hawaii Supreme Court “has managed to find in favor of Sierra Club, Friends of the Earth, Earthjustice … 90% of the time, 70% of those decisions overturning the [Hawaii] Intermediate Court of Appeals.”

But any batting average only becomes meaningful after you have enough times at bat to reveal the trend, in other words, 90% of just a few is still just a few.

To us that high score underscores just how out of control in favor of corporate exploitation the DLNR has been for decades and that better balanced management needs to better protect what’s left of our precious natural resources.