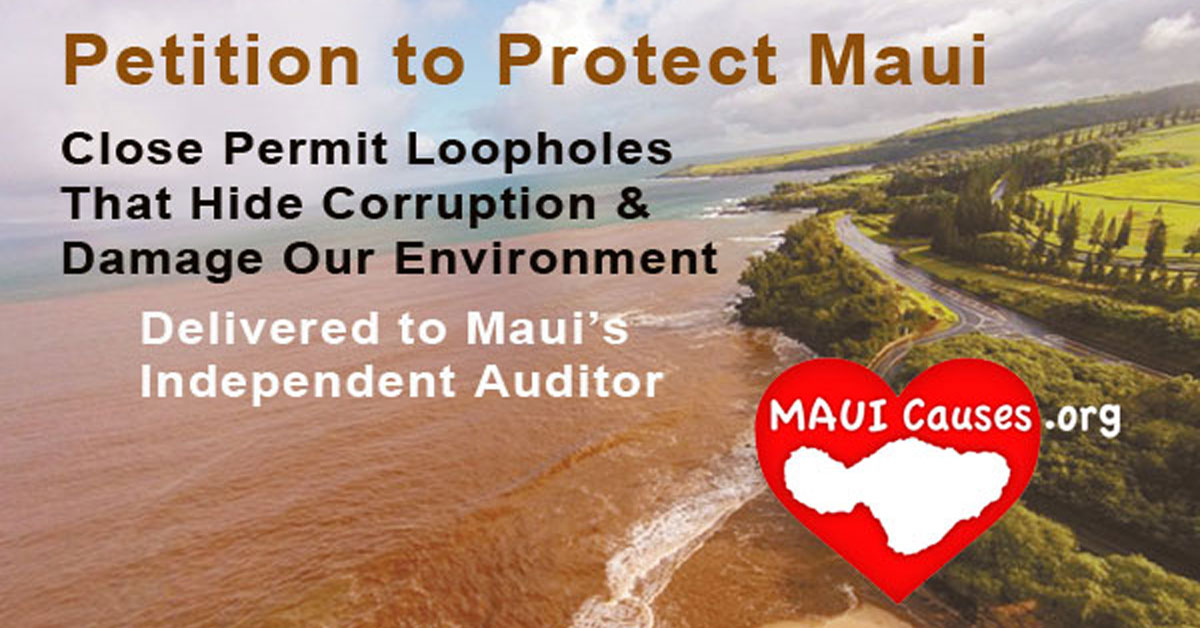 We now have clear evidence of fraud and collusion in Maui County’s administration of Special Management Area Permits to allow developers and licensed consultants to intentionally avoid public review and the cost of environmental protection, in violation of Federal Coastal Zone Management Laws.

As the decades of public records expose, one by one, politically appointed Planning Directors have selectively issued thousands of exemptions and SMA Minor Permits on private oceanfront properties and massive agricultural tracts that have been subdivided into condominiums, in order to serve the developer’s financial interests.

The cumulative impacts of toxic runoff obstructed coastal access, shoreline erosion and traffic jams are being perpetuated by an active and illegal covered-up of this fraud and collusion by Corporation Counsel.

We believe a simple, focused audit will expose loopholes in the SMA Permitting process and reveal to the Planning Commission the massive number of multimillion-dollar, private, oceanfront developments where the citizens have been illegally cut out of the review and approval process.

In order to end the decades-long exploitation of Maui Taxpayers, our Ocean Life, Reefs and Shoreline, we call on each County Council Member to sign this petition and join hands with the citizens in our request of Maui’s Independent Auditor to identify and close the loopholes that facilitate the irresponsible mismanagement of Federal Environmental Laws.

All of this systematically sucks our tax money out of the budget to the benefit of private developers. We pay their bills. And the environment sustains ongoing harm.

The Planning Director uses his enormous discretion to exempt developers from having to commit land for county road widening. To move the Pali Hwy, we just paid $4 million to buy back land that should have been ours for free.

The Planning Commission and Directors looked the other way while Olowalu’s developer skipped out without meeting their obligations. A citizen sued to bring them back 10 years later. We think there are thousand of Olowalu’s out there.

Council Member Elle Cochran and others before her, JoAnne Johnston-Winer, Michelle Anderson, Sol Kaho’ohalahala, have tried to stop this abuse but the Mayor’s lawyers stonewalled them all.

We think Corporation Council is blocking all public discussion of SMA Permit abuse and 3-Lot-or-Less Subdivision Deferral Agreements as part of an ongoing Cover-Up of multiple acts of fraud that were perpetrated around 2001 where a Land Planning consultant submitted falsified Order of Magnitude estimates and then went to work for the County as Deputy Director of Public Works, where he signed off on his own client’s oceanfront subdivisions containing the very same falsified estimates.

Maui Causes is launching this public petition to call upon our independent County Auditor to assess our financial loss and close the loopholes that hide this ongoing corruption and environmental harm.