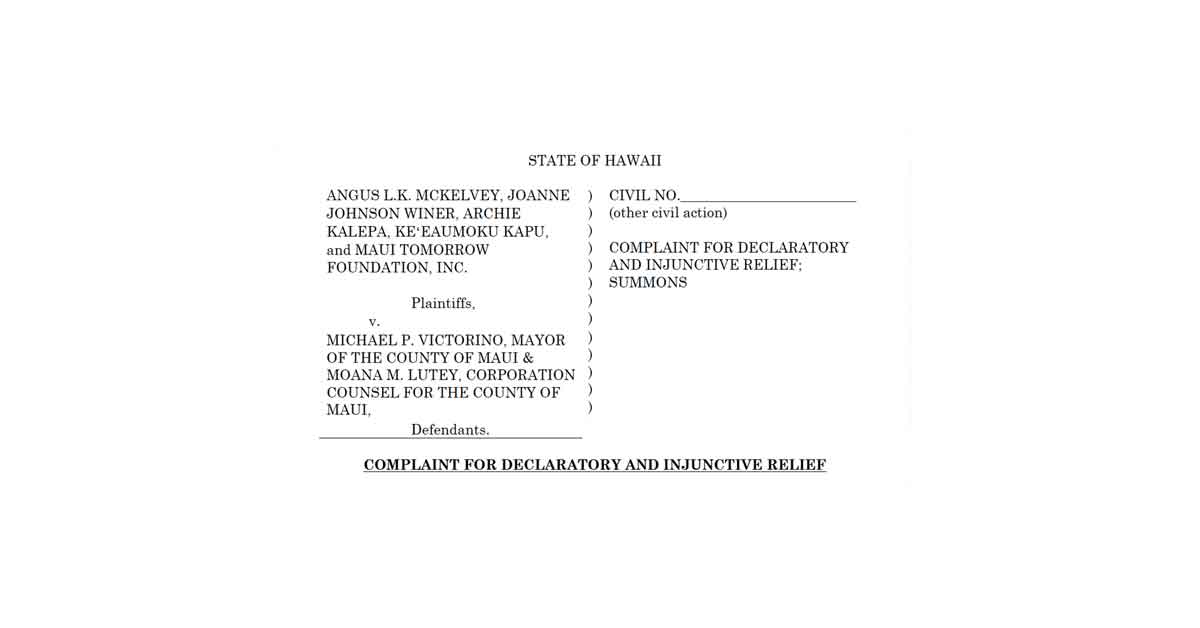 A “Crisis of the Charter”

Mayor Mike Victorino and his Corporation Counsel Moana Lutey are being hauled into court for ignoring the County Council’s vote to withdraw the Injection Well case from the Supreme Court.

Maui’s “other” lawyers at Council Services, who advise Council Chair Kelly King, say Mayor Victorino is exaggerating his authority by citing Honolulu’s charter, not ours. Maui’s Charter gives additional authority to settle a disagreement with the Mayor through a Council vote.

The Mayor’s power grab is based on an opinion that has never been voiced before in any of Maui’s previous hotly-contested Mayor/Council battles, lending credence to the idea that it was dreamed up not by Lutey but rather was manufactured by the richly-paid lawyers at Hunton, Andrews, and Kurth.

Hunton routinely lobbies for the Koch Bros. and defends industry polluters and is seen to have motivations that go well beyond, and are counter to serving the best interests of the people of Maui County. Two Hunton lawyers were recently bounced out of jobs they took with the EPA and are being investigated for lobbying for Hunton clients from inside the EPA.

A declaratory ruling from the court is necessary because Director Lutey failed to honor requests by both the Council Chair and Council Services attorneys to seek a judicial determination on her legal opinion before she wrote on behalf of the County to the U.S. Supreme Court. Lutey took action while being in a Concurrent Adverse Relationship with her constituents; the Mayor and the Maui County Council, which is a direct violation of the Maui County Charter.

Director Lutey may also be in hot water for unethically attempting to shift the settling authority to herself, through deceptive language she added to the Council’s original Injection Well Settlement Resolution.

The issues at hand are no longer just about the Injection Well case. If the Mayor’s claim of authority goes uncontested it will have lasting negative impacts on the County Council’s ability to take any legislative action and not have it overturned by the Mayor.

The County Council held a vote today as to whether to get its own legal counsel because Lutey refuses to represent them. Council Members Tasha Kama, Yuki Sugimura, Alice Lee, and Riki Hokama voted against it and in so doing are diminishing their authority to represent the people of Maui County.

I personally spent over 10 hours with Mike Victorino last December, documenting for him many of the corrupt and unethical actions by Corporation Counsel and certain directors, many of which he said as a Council Member he had long suspected but did not have the documents to prove. I gave him that documented proof.

Mike acknowledged the severity of those acts and firmly pledged that he was on board to flush those bad actors out and close the loopholes they systematically abuse. His actions in several realms have betrayed that promise. Maui Causes provided questions to ask during confirmation hearings in order to “take out” Directors Goode, Wong, Spence and Kim.

Bowing to what one can only imagine are enormous pressures, Mike Victorino has made himself culpable by protecting what he admitted he knows to be corrupt and unethical.

With his first-hand knowledge as a Council Member of the abuse of past Mayors and his pledge to restore power to the Council, Mayor Victorino has done a shameful, total 180 on his promises to do what he knows is right for the future of Maui County.

Citizen groups are now discussing launching a petition to gather the approx 5000 verified signatures needed to launch an impeachment proceeding against Mayor Victorino through the Court of the Second Circuit.