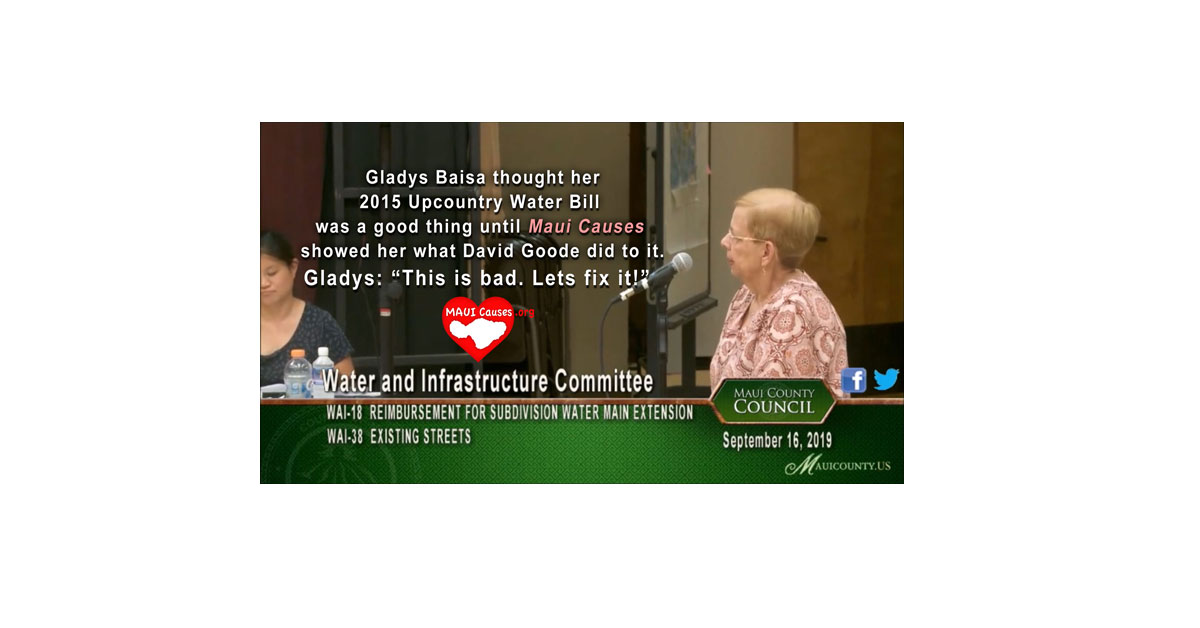 Maui Cause’s mission is to be a positive disruption to the Status Quo of manipulative and corrupt politics here in Maui County. That’s a necessary thing in a Mature Capitalist Society where established business interests use their financial and political advantages to exploit the rest of us.

Nowhere has that kind municipal exploitation been more evident than here in Maui County where members of the financial and political elite feel so protected that they routinely get up in front of the County Council to give testimony and lie through their teeth.

That’s what happened at a recent Water and Infrastructure Committee hearing on a resolution to remove an exemption from roadway improvements that large commercial developers countywide are using to shift their financial burdens onto the back of Maui taxpayers.

The 2 lot subdivision exemption was secretly added into the 2015 Upcounty water bill while no one was watching, apparently by then Public Works Director David Goode, with the direct assistance of corp counsel deputies Ed Kushi and Jennifer Oana.

Testimony was given at the hearing from a developer who very much wants the exemption to stay because he has applied for but has not yet received his exemption for a subdivision he’s got going up in Iao Valley. Typically, He didn’t bother to disclose that fact and his testimony was full of lies.

This is the same developer who’s subdivision at Oluwalu, David Goode signed off on as complete but who was brought back by a citizen’s complaint ten years later to install environmental protections and fire breaks that indeed had never been built.

Predictably, his testimony tried to shield David Goode‘s role in the 2015 bait and switch and he tried to lay the blame on then committee chair Gladys Baisa, saying that it was Glady’s idea to add the countywide roadway improvement exemption to the upcountry water bill and that she knew all along what was being done.

Well, that just isn’t true and Gladys who was there with no intention to testify just couldn’t hold back from getting up to the mike to set the record straight.

Gladys was characteristically gracious and forgiving and said she’s willing to give David Goode the benefit of the doubt that he just didn’t know the Upcounty water bill was only ever intended to impact subdivisions only Upcounty, and it was all just a misunderstanding. She even testified that she didn’t know the exemptions were being applied countywide until three years later when I questioned her about the apparent bait and switch.

But what about Corp Counsel? They knew the result was never what the council intended and they did nothing in all these years to retract and reconcile. That’s the extent of the power the Corporation Counsel has inappropriately wielded in the past and what Maui Cause is doing everything we can to empower the County Council to change. That’s the power struggle that’s going on right now over the injection Well case where Corp Counsel appears to be obstructing the will of the people as expressed in the County Council’s legitimate vote to settle the case and withdraw it from the supreme court.

Watch Glady’s testimony to the water committee she used to chair, and then my own, which actually came first that night, where I detail how David Goode, Ed Kushi and Jennifer Oana apparently all conspired to benefit large residential and commercial developers county-wide at the public’s expense.