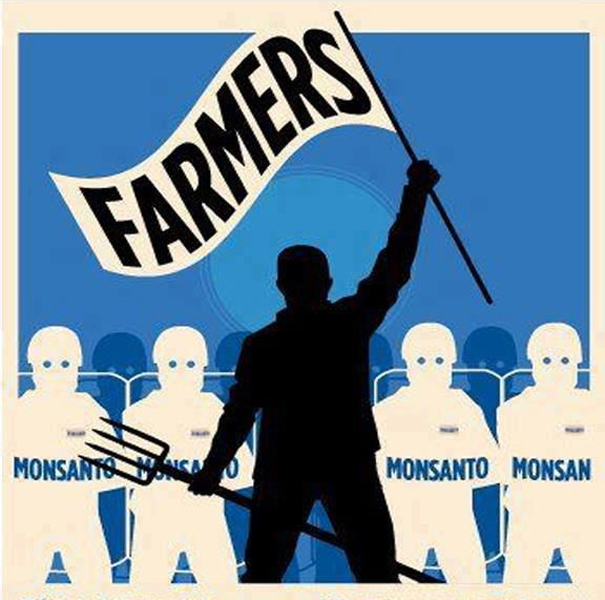 Three Nebraska farmers and an agronomist, all diagnosed with cancer, have filed a lawsuit against Monsanto alleging the seed and chemical giant of purposely misleading the public about the dangers of the world’s most widely used herbicide.

Monsanto markets glyphosate, the active ingredient in its herbicide-brand Roundup, as being able to kill nearly every weed out there yet being completely safe for people. It’s sold alongside Roundup Ready seeds that can be sprayed with the chemical without harm.

The New York Times in 2010 reported that 90 percent of soybeans and 70 percent of corn grown in the United States are from Roundup Ready seeds.

In March 2015 World Health Organization’s International Agency for Research on Cancer labeled glyphosate as a probable cause of cancer in humans and said it is most associated with non-Hodgkin’s lymphoma and other haematopoietic cancers, including lymphocytic lymphoma, chronic lymphocytic leukemia, B-cell lymphoma and multiple myeloma.

Those most at risk, the agency said, are farmers, farm workers and others with workplace exposure to Roundup.

The four Nebraskans who brought the lawsuit that was filed Wednesday in U.S. District Court in Lincoln have all been diagnosed with non-Hodgkin’s lymphoma.

The lawsuit alleges Monsanto “concealed or systematically sought to discredit” research showing a link between the chemical and cancer and continues to do so.

“Monsanto championed falsified data and has attacked legitimate studies that revealed Roundup’s dangers. Monsanto led a campaign of misinformation to convince government agencies, farmers and the general population that Roundup is safe. Its continuing denial extends to the date of this Complaint,” the lawsuit says.

On its website, Monsanto says the labeling of its herbicide as a possible carcinogen conflicts with the consensus of regulatory bodies and science organizations, such as the U.S. Environmental Protection Agency.

“’Probable’ does not mean that glyphosate causes cancer; even at 100 times the exposure that occurs during normal labeled use glyphosate is not a human health risk,” the company’s website says.

The chemical works by inhibiting an enzyme essential for plant growth. Monsanto says that because that enzyme isn’t present in humans or animals, glyphosate is safe when used according to label directions.

Since being classified as a possible carcinogen by the International Agency for Research on Cancer, several countries have banned or restricted the sale of glyphosate, including the Netherlands, France, Bermuda and Sri Lanka.

Monsanto has sued California to keep glyphosate off the state’s list of known carcinogens.

The plaintiffs in the Nebraska case include farmers Larry Domina and Robert Dickey both of Cedar County, York County farmer Royce Janzen and Dodge County agronomist Frank Pollard. They are being represented by a Omaha-based Domina Law Group and New York-based Weitz & Luxemborg.

Similar lawsuits have also been brought against Monsanto by agricultural workers in other states, including California and Delaware.

The lawsuit asks for unspecified damages.