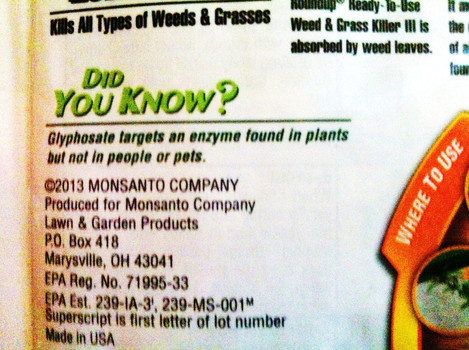 Glyphosate was originally patented as an antibiotic. It kills beneficial bacteria in everyone’s guts and in women’s vaginas. That ain’t just plants. Today a class action lawsuit was filed in Los Angeles County, California against the Monsanto corporation. The suit alleges that Monsanto is guilty of false advertising by claiming that glyphosate, the active ingredient in Roundup, targets an enzyme only found in plants and not in humans or animals. Monsanto makes this claim to support the contention that glyphosate is harmless to humans.

In the lawsuit, the argument is made that the targeted enzyme, EPSP synthase, is found in the microbiota which reside in our intestines and therefore this enzyme is found in humans and animals. It is further stated in the lawsuit that there are many human and animal health problems associated with the disruption of our intestinal microbes.

An Environmental Protection Agency memo dated October 30, 1991 states that the EPA classified glyphsate as a possible carcinogen in 1985. In this 1991 memo, without any justification, this classification was changed to Not Carcinogenic. Three scientists refused to sign, two of whom wrote beside their name: Do Not Concur. This document contains data that clearly shows a statistically significant increase in tumors in laboratory animals treated with glyphosate. But because there weren’t more tumors in the group of animals who received a higher dose of glyphosate than there were in the group that received a lower dose, Monsanto made the claim that the tumors could not be related to glyphosate.

Today’s lawsuit may be the beginning of an avalanche. Earlier this month, Beijing resident Yang Xiao-lu filed a lawsuit against the Chinese Ministry of Agriculture requesting information disclosure of the toxicology report submitted to the Chinese government for glyphosate pesticide registration in China. The case has been accepted and the collegiate panel of the court has informed the plaintiff that, considering that Monsanto is a stakeholder to the case, they have added Monsanto as an involved party to the case. Chinese citizens had previously petitioned the Ministry of Agriculture for this toxicology report but were denied. The Ministry cited “trade secrets” as the reason for denial. It is difficult to comprehend how a toxicology report would contain trade secrets since trade secrets generally constitute ingredients or a recipe for a compound or manufacturing procedure.

In today’s lawsuit, Monsanto is accused of deliberate falsification to conceal the fact that glyphosate is harmful to humans and animals. “Defendant intentionally misleads consumers by misrepresenting and concealing the true and correct facts concerning glyphosate…” Attorney T. Matthew Phillips says, “We are not trying to prove that Roundup is harmful or carcinogenic, we are merely pointing out that Monsanto is lying about the enzymes that Roundup targets. Roundup kills the weeds in your backyard and the weeds in your stomach.”

Judgment is sought against Monsanto to prohibit the company from continuing to make the claim that glyphosate targets an enzyme not found in humans and for compensation to the plaintiffs, including attorney fees.

Residents of California can become members of the class in this action by contacting T. Matthew Phillips attmatthewphillips@aol.com. Phillips has indicated that he hopes other attorneys in other states will follow suit [pun intended].