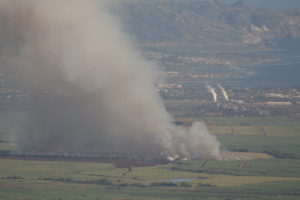 
Wailuku, Maui – On July 1 Stop Cane Burning filed suit against the Hawaii Department of Health (DoH) alleging that the regulatory system which allows open air agricultural burning is unconstitutional. Their attorney, Lance D. Collins, is asking for an injunction to immediately stop agricultural burning on Maui. This is the first case on Maui to be filed in the new Environmental Court.

Cane burning in Hawai’i was adopted during the territory period as an industry wide practice after indentured servitude was abolished.

In 1971, the DoH gave sugar plantations three years to end cane burning. Then head of the Air Sanitation Branch (now called Clean Air Branch) Robert S. Nekomoto cited a 1967 study which found a high incidence of asthma among people who breathed cane smoke. In 1973 backyard burning was banned on O’ahu and DoH banned it on all islands in 2012 saying “Open burning creates an unnecessary nuisance and possible health risk due to the smoke and air pollution it produces.”

“Does it make sense that backyard burning is banned as a health risk but HC&S is allowed to burn 36,000 acres six days a week, nine months per year?” asked plaintiff, Karen Chun who heads up Stop Cane Burning.

“HC&S has been dragging their feet and promising the end of cane burning is just around the corner for 44 years,” added plaintiff Brad Edwards. “We don’t believe them any more.”

The lawsuit has been filed in the Environmental Court.
The lawsuit asserts five separate counts.

•First, the state Air Pollution Control Act lacks any standards upon which the DoH may lawfully adopt rules and the rules that have been adopted constitute an unlawful delegation of legislative power in violation of Article III, Section 1 of the State Constitution.

•Second, permitting of agricultural burning violates Article XI, Section 9 of the State Constitution’s right to a clean and healthful environment.

•Third, permitting of agricultural burning constitutes a breach of the public trust protected under Article XI, Section 1 of the State Constitution.

•Fourth, exempting agricultural burning from the general ban on open air burning is an irrational classification in violation of the equal protection clause of Article I, Section 5 of the State Constitution.

•Fifth, DoH failed to consider the Hawai’i Environmental Policy Act (HRS Ch. 344) when it promulgated the rules for permitting of open air agricultural burning and are invalid.

The plaintiffs are:
Stop Cane Burning:
Stop Cane Burning was founded in 2011 and continues a 40 year fight to clean up the air on Maui and stop the six days per week cane burning for nine or ten months a year. This smoke often drops on schools, homes, businesses and roads, causing acute breathing problems and long term health damage. As the trades have decreased and population downwind has increased, the smoke is affecting the health of more and more people. Stop Cane Burning is working to end this archaic and damaging practice.

Trinette Furtado:
Born and raised on Maui , Trinette Furtado is the product of plantation ‘ohana. Three generations of her ‘ohana have worked for the sugar mill; her tūtūkane even having worked as a personnel manager, receiving one of the first houses of a housing project off Lāhainaluna Rd on Pauoa St. She graduated from Maui High and UH-Mānoa and currently works as a web designer.
Now a web developer and community activist living in Ha’ikū, Trinette is concerned about the health and well being of her 10-year old daughter who attends Ke Kula Kaiapuni o Pā’ia, a school surrounded by cane fields and inundated by cane smoke on burn days.
She is adamant that “the sugarcane industry is not ‘a Hawaiian institution’. It was not KĀNAKA who industrialized it”. She seeks to improve the health of ALL the residents of Maui.

Brad Edwards:
Brad Edwards was born on Oahu. His great grandparents arrived in Hawaii in the late 1800’s from Portugal and worked hard to make a living by opening up a Portuguese bakery on the town side of the island. Brad attended college in California, earning a degree in Environmental Science and Social Work, and he has been working with at-risk children and families for almost 15 years.

In his work with children and families on Maui, Brad says he has become all too familiar with many of the challenges and struggles that families on Maui face and sees firsthand the negative health effects that children, including his hanai son, face when they have no choice but to breathe in smoke from local cane fires.

“I’ve heard the countless promises made by HC&S over the past 30 years to find alternative harvesting methods and crops, only to be disappointed year after year by their lack of effort to implement necessary changes.” Brad values the employment opportunities that sustainable farming offers here on Maui and looks forward to a time when all of Maui can benefit from clean, healthy, and sustainable farming jobs that keep our air clean and our island green.

Karen Chun:
Karen Chun believed HC&S when they said their smoke was harmless until she got Reactive Airway Disease from a bad burn in 2011. She vowed she’d do everything possible to prevent smoke from ruining anyone else’s health and founded Stop Cane Burning that same year. Her kids are descendants of cane workers who came from Japan in the very early 1900s. She has a MS degree in engineering and is an avid outrigger canoe paddler and state medalist. Although lung disease has damaged her competitiveness in the last four years, she still paddles as much as she is able.