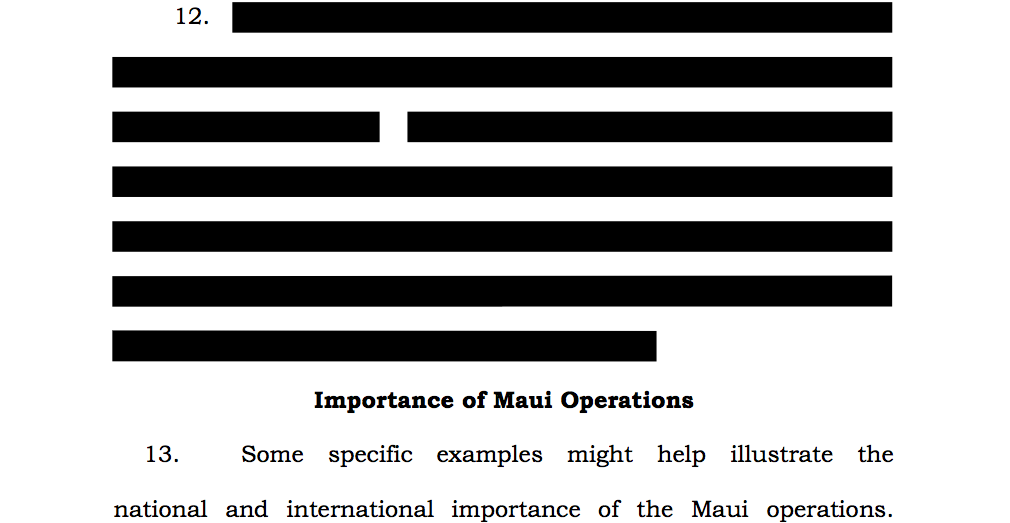 A scandal that needs to come to light now

Imagine you are a lawyer arguing a case before a judge. There is no jury. The judge will decide the outcome.

The judge tells you, “Look, the other side, your opponents in this case, have filed documents with me. These documents are at the heart of their argument. I can’t allow you to read the documents. I can only give you access to heavily redacted versions. You’ll have to do the best you can. I have read the full documents. Your opponents, of course, know every word of those documents. But you don’t. And you won’t. Good luck. Limp along as well as you can.”

That’s what we’re talking about here.

(The link to the document is located at the bottm of this article.) Last Election Day, the people of Maui County voted to halt all local GMO and pesticide experimentation being carried out by Monsanto and Dow.

During the temporary halt, a complete independent investigation would be done, to find out exactly how harmful the pesticides and GMOs were.

But the legal and binding vote was suspended, because Monsanto and Dow immediately sued.

The case is now hung up in Federal Court.

I’ve just learned that Monsanto filed documents “under seal,” to make its case in the proceeding now before Federal Judge Susan Oki Mollway.

Monsano requested the court make the documents secret, and the previous Judge, Barry Kurren, agreed to it.

Here, in legalese, is Kurren’s decision:

“ORDER GRANTING PLAINTIFFS’ EX PARTE APPLICATION TO FILE UNDER SEAL IN PART THE DECLARATIONS OF SAM EATHINGTON, JESSE STIEFEL, AND ADOLPH HELM IN SUPPORT OF PLAINTIFFS’ MOTION FOR TEMPORARY RESTRAINING ORDER AND PRELIMINARY INJUNCTION re 13- Signed by Judge BARRY M. KURREN on 11/14/2014.
‘IT IS HEREBY ORDERED that Plaintiffs’ ex parte application is GRANTED. Accordingly, the subject declarations shall be filed by the Court under seal, and redacted versions may be filed with the Plaintiffs’ Motion.’”

That means the lawyers for the voters of Maui can’t see those Monsanto documents. Not in full. They can only read redacted versions of Monsanto making its case for continued GMO/pesticide experiments on Maui—contravening the demands of Maui voters.

What kind of court is this?

Judge Mollway, who will decide the case, can read everything Monsanto offers in its defense, but the lawyers against Monsanto have no full access and, therefore, can’t argue their side from full knowledge.

This echoes of cases where prosecutors claim “national security” as an issue. In those instances, documents are either excluded as evidence, or only redacted versions are allowed in.

Is this what we’re dealing with here? Monsanto’s concerns have become, in a federal court, a matter of national security?

Below, you will see a link to one such redacted Monsanto document. You will see the many blacked out lines.

One section (no.7) states: “…Monsanto currently owns or leases approximately 784 acres of farmland on the island. Certain specific locations on Maui are uniquely suitable to multi-season/cycle breeding and research.” The next 14 lines of the section are blacked out.

It’s not much of a stretch to infer those 14 lines are blacked out to conceal Maui locations of Monsanto facilities. You mean the addresses and names of Monsanto stations and growing fields on Maui are a secret?

Suppose, in your city, in your region, a major corporation was carrying out, on a regular basis, experiments with new, non-commercial, toxic pesticide chemicals and genetically altered organic materials. And suppose you were told that the permanent facilities of that corporation in your region were located at secret sites. How would you feel about it?

Wouldn’t that raise significant suspicions in your mind? Wouldn’t you want to know exactly what was going on at each and every one of those facilities? And if you were denied that information, as well as the names and addresses of the locations, wouldn’t you infer the secrecy was covering up something harmful to you?

Whole sections of the Monsanto court document are blacked out (e.g., no. 8 and 9). What do they say? Only the Judge and Monsanto know. The lawyers representing the voters of Maui don’t have a clue.

Section 10 states: “The current [Monsanto] workforce in the County [of Maui] has been trained over many years at the precise pollination techniques required and to perform other specialized tasks.” The next two lines are blacked out. Why? Because Monsanto considers further explanation of what these workers do to be proprietary secrets? This is what the Maui voters want to know about, because they, the people of Maui, are on the receiving end of the secret wind-blown pesticide and GMO experiments.

Section 11 of the court document is quite strange. It states: “And the US Department of Agriculture [USDA] sets requirements for how regulated field trials of new GE [genetically engineered] crops must be conducted.” The next 12 lines are blacked out. Why? Are the USDA regulations themselves a secret? Is there something about these regulations Monsanto doesn’t want the public to know? The “field trials” are at the heart of what the people of Maui are objecting to. How toxic are the secret experimental pesticides? How dangerous to health are the secret experimental GMOs?

Section 13 mentions a corn-crop disease called Goss’s Wilt. Then, six lines are blacked out. Why? What is Monsanto hiding from the people of Maui?

How in the world can the lawyers representing the voters of Maui argue their case in federal court when all this information is being withheld from them? The answer: they can’t.

Is some of Monsanto’s federally funded biowarfare research (contracted by the US National Institutes of Health)—the details of which Monsanto won’t disclose—taking place on Maui?

The lawyers representing the people of Maui should be filing new motions to declare this case an impossible travesty. Until the lawyers can read every word of the documents Monsanto has filed with the court, there is no case, there is no proceeding, there is only a con job, with Monsanto the preordained winner by default.

And until the alternative media covers the Monsanto-Maui case and blows it up into the scandal it is, there will be no chance of justice.

Here is a link to the Monsanto court document I’ve been referring to: