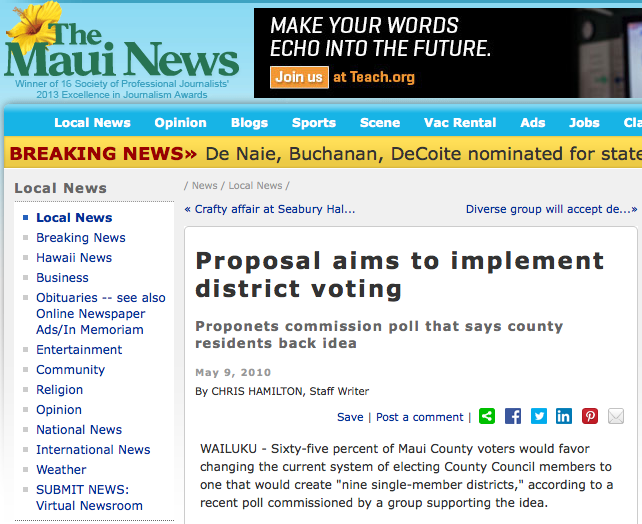 WAILUKU – Sixty-five percent of Maui County voters would favor changing the current system of electing County Council members to one that would create “nine single-member districts,” according to a recent poll commissioned by a group supporting the idea.

Proponents said the intent of their proposed charter amendment is to make sure County Council members are actually voted into office by the constituents in their districts. But they also said the plan would eliminate the need for candidates to run expensive countywide campaigns and help attract fresh faces to the council.

A number of current and former members of the council were elected to office by receiving a majority of the vote countywide – but lost the vote in their home districts.

“We feel single-member districts would allow the different communities to have more control over who their council member is,” said Gordon Cockett of the West Maui Charter Working Group, which hired QMark Research for the poll of 503 county residents from April 20 to May 1.

The idea of district-elected council members has been bandied about for years. But this time, it appears to have some traction, supporters said.

Council Member Jo Anne Johnson has introduced the West Maui Charter Working Group’s proposal to the council, and the bill has been referred to the council’s Committee of the Whole. If approved by the council, the charter amendment would be placed on the ballot in November to be decided by voters.

Under the proposal, voters would be asked if the county should abolish at-large elections for the council and instead establish nine election districts.

The boundaries of those new districts would be drawn by a County Reapportionment Commission, whose members would be nominated by the mayor and confirmed by the council.

Under the law, the county’s population would need to be divided equally between the nine districts. That means smaller regions, like Lanai and Molokai, could not each have a district to themselves, but would need to be grouped with larger populations.

However, Lanai and Molokai would not be combined into the same district, under the working group’s proposal.

The introduction of the group’s charter amendment by a council member is a significant step forward for the effort.

A similar proposal by the Kula Community Association last summer received absolutely no response from the County Council or Mayor Charmaine Tavares, said Dick Mayer of the association.

The current system of at-large council members was established in the Maui County Charter in the 1990s. Honolulu and the Big Island still maintain district voting for their council members.

Another community group, the North Beach-West Maui Benefit Fund Inc., commissioned University of Hawaii law professor Jon Van Dyke to prepare three alternatives to the current at-large system. His options for equally distributed voter districts were mailed out to residents across the county in the past couple months.

Mayer said the Kihei Community Association, Maui Chamber of Commerce and Realtors Association of Maui have also all taken an interest in changing the current system. He described the movement as a groundswell that incumbents would have a difficult time ignoring now.

Under the existing system, each council member is required to be a resident of the district whose seat he or she holds. However, proponents of the charter amendment call that system flawed.

While Council Member Sol Kaho’ohalahala, who has fought multiple lawsuits alleging he does not meet the residency requirement, might be the most high-profile case, a number of council members past and present have faced grumbles or complaints that they don’t live in the districts they are supposed to.

Lance Holter, chairman of the Democratic Party of Maui, agrees that change is needed.

“I think that this ruckus that they started in Lanai over Sol’s residency has to have permanently enveloped he and his family in a morass of lawsuits, that and makes other good people not want to run,” said Holter, a Kaho’ohalahala supporter.

The proposed charter amendment could also put an end to the dominance of Central Maui voters in choosing council members, said Cockett and several other proponents.

“We wouldn’t have to just have to take what they give us anymore,” he said.

That could also sap the influence of unions in council races, since members tend to be concentrated and organized in Central Maui.

If the charter amendment passes the hurdles of both the county council and the 2010 ballot, Mayer said he expects the commission to have the new voting system in place for the 2012 election.

“This would make sure that our communities are represented as best as possible,” said attorney Lance Collins, West Maui Charter Working Group secretary. “I think that it would improve confidence in our local decision making body. And according to our poll, two-thirds of registered voters would support it, especially people in Hana and Molokai. It seems like everybody wants it, and it’s the right time.”

* Chris Hamilton can be reached at chamilton@mauinews.com.