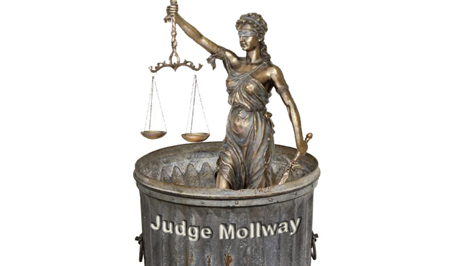 Think about it. You’re locked in a high-stakes lawsuit against major corporations, and you can’t see document-material the corporations have filed in order to make their argument with the Judge.The Judge has seen the redacted blacked-out material, and she will, in part, base her ruling in the case on it. There is no jury.

But you can’t see the blacked-out material, you can’t argue your position with full knowledge.

Welcome to a rigged process.

As my readers know, I exposed the fact that, in the Monsanto/Dow vs. Maui lawsuit, the corporations filed documents with the court that contained large amounts of blacked-out redacted material.

The lawyers representing the people, whose vote to block Monsanto/Dow experiments in Maui was suspended by this lawsuit, have not yet seen those redacted lines and paragraphs.

Therefore, they can’t argue their case from full knowledge.

In the last few days, one of the lawyers, Sharon Kim, who represents the Shaka Movement against Monsanto/Dow, made a request to Nick Kacprowski, a lead attorney for Monsanto/Dow, to see the redacted material.

Their exchange of emails concludes with Kacprowski writing:

“We should note that nothing in this message should be construed as conceding that Shaka has any right to access the sealed information. For example, Plaintiffs [Monsanto, Dow, and others] are concerned by the hostility that Shaka has shown toward the [GMO] seed companies in the past and thus by the risk that it will use this confidential and sensitive information publicly for improper purposes.”

Absurd. How Shaka “would use this material” is a speculative hypothetical. The material’s relevance to the lawsuit can only be assessed by allowing Shaka’s lawyers to read it.

The Judge in the federal case, Susan Oki Mollway, should long ago have ordered that the redactions be removed.

Here is the email exchange. The first email is from attorney Sharon Kim, representing the Shaka Movement. The reply is from Nick Kacprowski, representing Monsanto/Dow. His reply is dense with legalese, but you’ll get the point of it.

This will respond to your request that Plaintiffs provide Shaka with unredacted versions of the sealed documents in this case by April 22. As you know, Plaintiffs have filed a Motion to Vacate the Expedited Briefing Schedule on your appeal, Case No. 15-15641. As our motion notes, your appeal of the preliminary injunction order will be mooted when the Court rules on the merits of the pending summary judgment motion, which it has indicated it will do by the end of June. If the Ninth Circuit grants the Motion to Vacate, Shaka will have no need for the unredacted documents in the near future, and possibly never, in order to pursue an appeal in this case.

Our proposal is that the parties stipulate to a protective order that provides that the sealed documents will remain sealed, without access for Shaka, unless the Ninth Circuit denies Plaintiffs’ motion that the briefing schedule should be vacated in Case No. 15-15641. It makes sense to defer Shaka’s request to access the sealed documents given that: 1) the sealed documents contain highly sensitive and proprietary information; 2) there is no protective order in place and there will be tricky issues to work out regarding what, if any, information in the documents Shaka should be allowed to access and what the restrictions governing the use of the documents will be; and 3) the Ninth Circuit’s ruling on the Motion to Vacate may soon moot the issue of needing those documents for the appellate record.

We should note that nothing in this message should be construed as conceding that Shaka has any right to access the sealed information. For example, Plaintiffs are concerned by the hostility that Shaka has shown toward the seed companies in the past and thus by the risk that it will use this confidential and sensitive information publicly for improper purposes.

Justice? Transparency? Never heard of it.