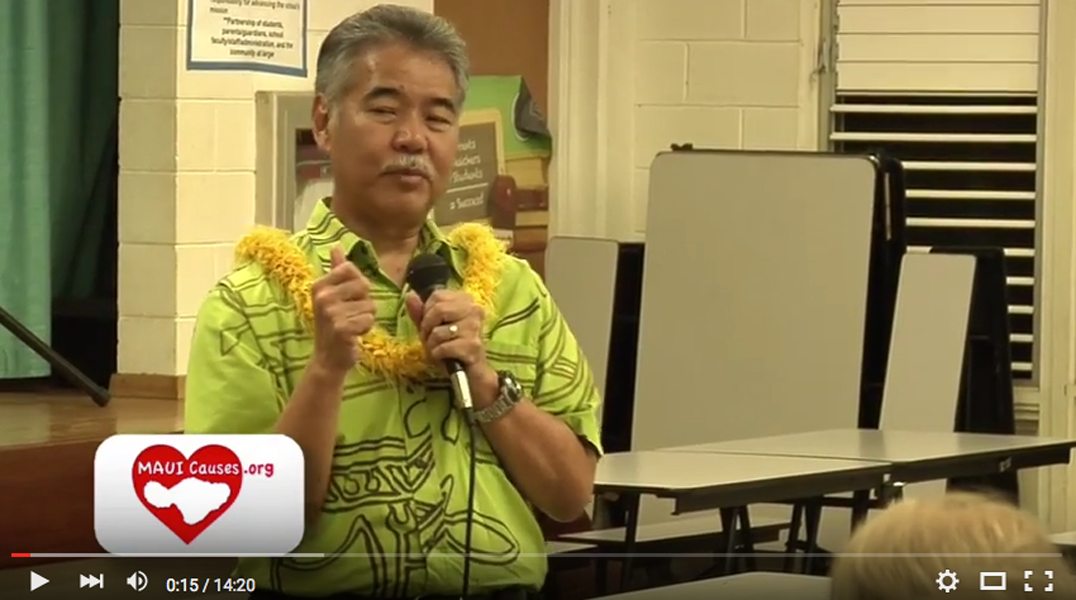 Gov Ige shares his excitement that Hawaii was selected as the first ever US venue for the The International Union for Conservation of Nature (IUCN) – the world’s largest conservation event to be held here Sept 1 -10 2016, because, says Ige, Hawaii is such a shining example of conservation efforts, a model for the world. Really?

We suggest that just the opposite is true. It’s just as easy to assert that Hawaii was chosen for this once in 4 years event because what’s going on here is among the most critical, evolving, man-made environmental disasters in the world. The conservationists are coming to try to save Hawaii not praise it.

It wasn’t so long ago that farms in Hawaii grew 90% of our food, with tons more going to export. Today farming in Hawaii has been given over to corporate driven, chemical-based “agricultural manufacturing” of seed products for export. So complete has this takeover been that we now are forced to import 90% of the food we eat and our delicate environment is being subjected to the massive risks posed by world’s largest array of open-field testing of unique biological creations and chemical cocktails, including and especially Round Up. whose active ingredient Gylphosate is a weak antibiotic and endocrine disruptor. Persistent exposure to weak antibiotics is a known path to disease as it fosters resistance, expressed as super bugs and super weeds and throws off the natural balance of beneficial bacteria that all life forms life rely on. Glyphosate is suspected to cause Leaky Gut Syndrome, Obesity, Gluten Intolerance http://www.ncbi.nlm.nih.gov/pmc/articles/PMC3945755/ Non-Hodgkin lymphoma and a host of other dysfunctions http://ecowatch.com/2015/01/23/health-problems-linked-to-monsanto-roundup/ including many women’s issues because Round Up has been found to hinder Lactobacillus bacteria which is necessary for proper vagina flora balance. http://www.ncbi.nlm.nih.gov/pubmed/22362186 https://en.wikipedia.org/wiki/Vaginal_flora

Here on Maui Monsanto and Dow spent millions and still failed to ward off a community-driven electoral initiative to require independent testing of their field practices. The community here still desperately wants to know that their children are not being harmed by corporate abuse of our deeply-flawed, corporation-designed federal regulatory system and woefully understaffed and underfunded state oversight. In spite of Big Ag’s massive spending, the most ever for any local ballot initiative, Maui’s voters approved the motion and the companies are now spending even more fighting the people’s wishes in court.

HC&S’s decision to suspend sugar cane production was not only based on wet weather and a drop in sugar prices. The permitting process by which the company takes its water from public lands and which allow it to fill our air with toxic cane smoke are now being reviewed by the courts as violations of the public trust by state agencies. As well, a scam that was recently exposed whereby HC&S sold electricity generated from burning coal instead of bagasse in their sugar mill (that has no air pollution scrubbers), also contributed cane’s downfall.

Hawaii’s current agricultural system is not at all sustainable and with any luck this confluence here of people who know what they are talking about will serve to blow this issue up to world exposure and force our state and county governments to right this deadly wrong. We grow only 10% of the food we eat. Who will feed our people if the boats stop coming or a tsunami destroys our ports? The state’s efforts to re-establish food security here have been anemic at best.

The governor does mention trying to establish diversified Ag parks on all the islands, enhancing the Ag loan program to facilitate opportunities for small farmers, and skewing the Dept. of Ag’s attention away from corporate Ag towards the needs of small farmers. We applaud all these actions, they can’t happen fast enough. The Governor also acknowledges that the state has a problem when it comes to staffing it’s agencies. For some reason they can’t seem to find and hire qualified people. What is up with that?

One would think, especially with such a gathering happening here, that the Governor would be racing to enhance and increase Hawaii’s bragging rights on sustainability by supporting demonstration projects of farming techniques like ultra low-cost Korean Natural Farming. KNF has been adopted by the entire nation of South Korea and is winning favor the world over wherever Monsanto, Dow, Pioneer, Syngenta and the other chemical companies have not been allowed to dominate agricultural practices. Korean Natural Farming relies on enhancing the biodiversity of soil microbes and bacteria rather than killing them with Round-Up. The chemical companies view KNF just as they do GMO labeling and Maui’s GM Moratorium, as their enemy against which they will go to no end to stop.

Hawaii should be racing to support clinical studies of techniques like ultra low-cost Korean Natural Farming rather than allowing Monsanto to support a UH student’s Masters Thesis that explicitly seeks to discredit KNF.

There are a few measures before the legislature currently that will support the development of diversified non-chemical based Ag. HB2568 makes an appropriation for a nutrient cycling center pilot project on Maui. Testify at http://capitol.hawaii.gov/measure_indiv.aspx?billtype=HB&billnumber=2586&year=2016

Also please join and support your local chapter of Hawaii Farmers Union United​
They support pilot programs across Hawaii that support all forms of diversified AG.

Gov Ige’s campaign organization staged this “Chow Fun with the Governor” talk story event in a Kahului elementary school. His campaign only announced the event a few days before. The Maui News, after initially posting the event, for some reason subsequently removed the notice from their website. Members of the press were told it was by invitation only, which wasn’t the case. Hardly any press or community activists showed up. In fact there wasn’t much of a turnout at all. But there were good questions from the audience and we’ll air a full length version on our Akaku show, Mondays and Sundays at 7PM on Ch 55. 1 thought on “<h1>Gov. Ige Claims Hawaii is a World Leader in Conservation. Really?</h1>”