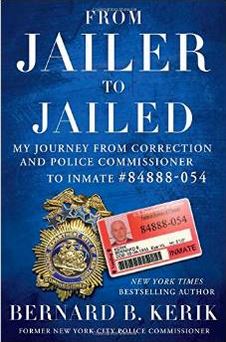 Perhaps best known as Mayor Rudy Giuliani’s top adviser during 9/11, former New York City Police Commissioner Bernard B. Kerik was just a hairbreadth from taking over the Department of Homeland Security in 2004 when he was battered by a flurry of allegations and probes that some saw as politically motivated.

Now, Kerik is using his new memoir, “From Jailer to Jailed: My Journey From Correction and Police Commissioner to Inmate #84888-054,” to launch a high-profile campaign for criminal justice reform.

Kerik and his new book have been featured on NBC’s Today, Morning Joe and many other outlets. Already the book has skyrocketed in sales, hitting #1 on the Amazon bestseller list.

Kerik says his own experience has given him a new view. He fears America’s criminal justice system is creating a permanent underclass, especially among young African-Americans who are treated too harshly for minor drug crimes.

The system is simply out of control, he argues.

In an exclusive Newsmax interview, Kerik blames the nation’s tangled thicket of laws, mandatory sentences, and its habit of turning young offenders into hardened criminals.

But the real victim, he says, may be the American public that pays the exorbitant cost of a criminal justice system that Kerik warns is on the verge of imploding.

Newsmax: Why put your prison ID and inmate number right there on the cover of your book?

Bernie Kerik: The reality is I’ve made mistakes that I’ve paid a tremendous price for. Those mistakes will live with me for the rest of my life. They have become part of my identity, which is the reason for that inmate ID and the number.

What was your reaction to the circumstances you witnessed while incarcerated?

No one in the history of our country with my background and experience — and more importantly, my success — has ever actually been a target of the system. That gives me a perspective that, realistically, no one else has. I’ve seen the inside as someone extremely knowledgeable of how the system is supposed to work. … Then to see the system from the inside out was shocking.

Say a 19-year-old is busted for selling a few grams of cocaine. Doesn’t he owe a debt to society?

If that was a really bad guy, and you had to put him away for 10 or 20 years, OK, I get it. But that wasn’t a really bad guy. That guy should have been put in a program … Rehabilitate him and teach him right from wrong, rather than completely, personally and professionally annihilate his life. Because that’s what we did. And you know what? There are thousands upon thousands of people just like him in prison.

Would you do away with solitary confinement?

What’s the system’s biggest flaw in your view?

We take regulatory, administrative violations and we turn them into criminal conduct. In so doing, that person becomes a felon. If they worked in banking, or law, or law enforcement, they can never do it again. If medical, there’s a really good chance they can’t do it again. In some states, you can’t get a barber’s license, or even a job as a garbage man. … A convicted felon basically pays a life sentence for any felony, regardless of the crime.

Give us an example of an absurd law that should be taken off the books.

You have people who kill the wrong animal while hunting, use the wrong weapon, or kill some animal on the wrong day — there are a thousand of these things. Catch too many fish, catch the wrong type of fish, catch too big of a fish. They make these people felons. With some 2.3 million U.S. prisoners, what will happen in your view without serious criminal justice reform?

It is an economic catastrophe for this country. It’s unsustainable, and over time, the system will implode. … The states have budgets they have to adhere to. But the federal government just keeps printing money and throwing it into the system.

Get your copy of Bernard Kerik’s new bestseller “From Jailer to Jailed: My Journey From Correction and Police Commissioner to Inmate #84888-054,” at bookstores everywhere or go online to amazon.com – Go Here Now