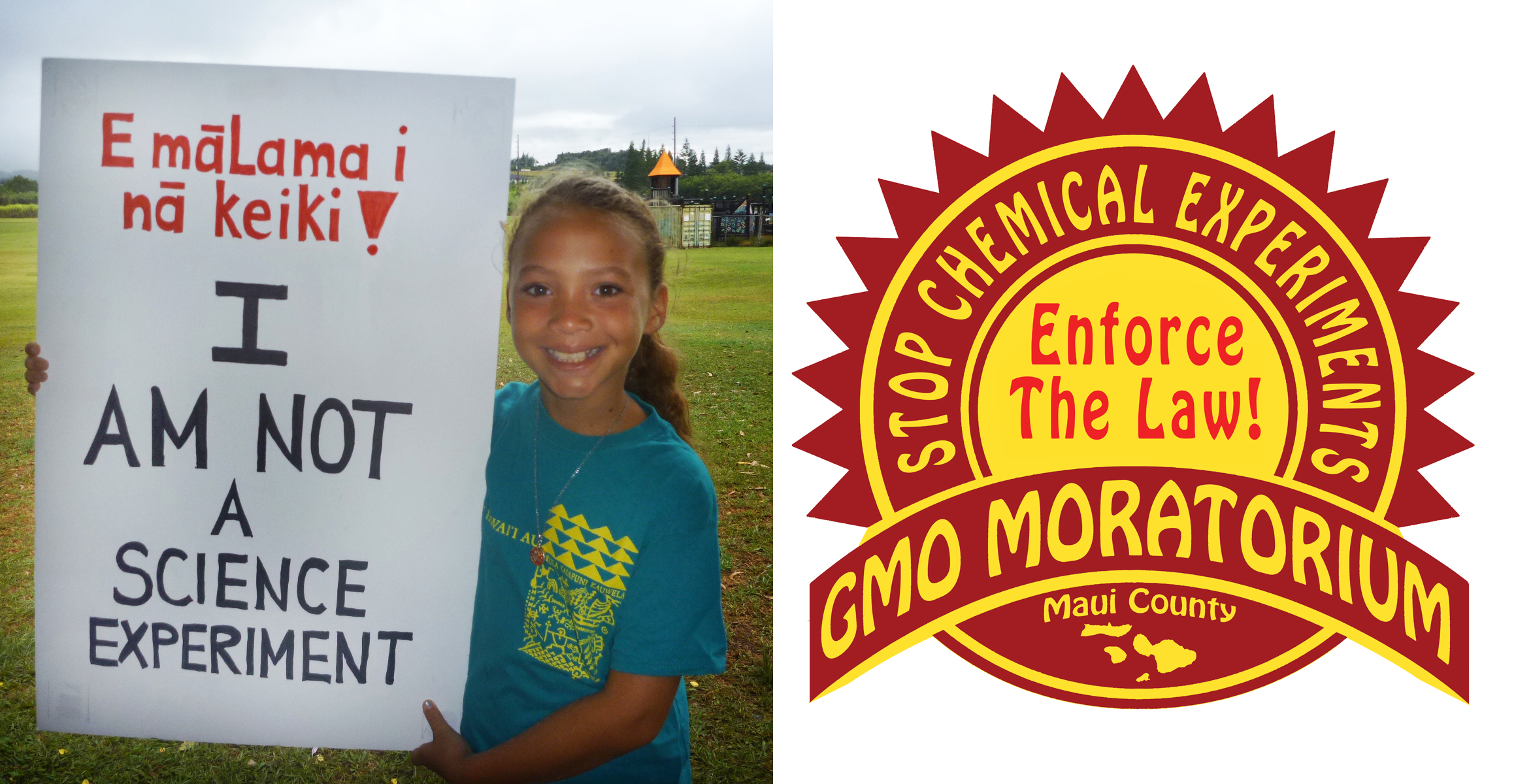 I’ve been keeping my mouth shut for a while on this explosive issue, because I was waiting for the results of a March 10 hearing. Now, strangely, the hearing has been postponed at the last minute.

My readers know I was, for a time, covering the Maui-Monsanto-Dow war extensively.

To summarize: in the last election, the voters of Maui, in a ballot measure, decided to place a temporary ban on further Dow/Monsanto GMO/pesticide experiments in Maui County.

Immediately, Monsanto, Dow, and yes, even the County government of Maui (betraying their own voters), lined up against the results of the vote.

Monsanto and Dow, joined by the Maui County government, sued to nullify the results of the vote, claiming the regulation of GMOs comes under the control of the state of Hawaii and the federal government, and can’t be decided at the county level.

That’s where we are now. The voters’ demands are suspended in limbo. Their legal call for an independent commission to investigate the practices of Monsanto and Dow in Maui County, and decide whether they threaten the people and the land—that urgent call has been silenced for the time being.

I submit that a vital fact has been overlooked and shoved into the background. A vital, primary, and overriding fact.

We are not talking, in this specific Maui case, about state or federal laws that govern normal GMO/pesticide farming. Whatever those laws say, whatever practices they cover, the issue on Maui has another dimension.

Maui County is home to ongoing Monsanto and Dow EXPERIMENTATION with new GMO seeds and new pesticides. GMOs and pesticides that are not for sale on the commercial market.

Research and development. Out in the open air.

Experimentation, which naturally affects the humans living there, and the land.

Look at the actual wording of the ballot measure that was passed by Maui voters:

“The Genetically Engineered (GE) Operations and Practices occurring in Maui County (also known as GMO) are different than GE food production farming and therefore pose different circumstances, risks, and concerns. In Maui County, GE Operations and Practices include the cultivation of GE seed crops, experimental GE test crops, and extensive pesticide use including the testing of experimental Pesticides and their combinations in what is effectively an outdoor laboratory.”

In other words, the voter ban applies to those experimental GMOs and experimental pesticides Monsanto and Dow are deploying, with the people of Maui as the guinea pigs.

Bottom line: Experimentation on humans with GMOs and pesticides does not fall under state or federal laws pertaining to agriculture.

Experimentation falls under a whole other set of laws.

For example, laws on informed consent. The people being experimented on have a right to know exactly what is being done to them—before it is done.

This principle has already been violated on Maui thousands of times, by Monsanto and Dow.

The ballot measure which passed calls for knowledge, for investigation to produce knowledge, so the citizens of Maui will know how they are being affected by the EXPERIMENTATION.

That’s what this is all about.

Allowing mass experimentation on humans, with new GMOs and new pesticides, without INFORMED consent…that is the crime. That is an obvious and undeniable crime.

Because that’s what Monsanto and Dow are engaged in, day in and day out.

Of course normal GMO/pesticide farming causes serious health problems. Of course criminals of both the corporate and government variety lied and cheated their way into approval of GMO crops and their attendant toxic pesticides.

But the issue on Maui, right now, as I’m explaining, is about the crime of experimenting on people with DIFFERENT substances, keeping people in the dark, not permitting independent scientists to assess exactly what Monsanto and Dow are letting loose on the population.

The wording of the ballot measure that was passed reveals that its authors know exactly what they’re talking about: no informed consent, no independent assessment of risk, no prior oversight, no exposure of the details of human experimentation on the whole population of Maui County.

So carry that sword forward.

This is no different, in principle, from, say, the infamous and devastating Edgewood Arsenal programs (1952-1975), in which US soldiers were “treated” with nerve gases (VX, Sarin). The soldiers were assured the experiments were completely safe.

If Monsanto, Dow, the judge in the current Maui case, and the Maui County officials think this is an egregious comparison, let them open up the books and the corporate labs and the canisters and prove it—by allowing many independent researchers to examine exactly what the hell is going on, on Maui.

What’s that? What I’m asking for is “proprietary corporate data?” “Privileged, secret, and protected information?”

With a few tweaks of language, that’s what officers told the soldiers at Edgewood Arsenal. .

The concealment of precious Monsanto/Dow data stops at the line where humans are subjected to corporate whims.

Tell you what. We’ll house Monsanto/Dow scientists and execs in a hermetically sealed dome for a couple of years. Spray them with round after round of “cutting-edge” pesticides, and feed them with crops containing “breakthrough” GMOs. That’ll be a good start. Let’s see what they look like when they emerge from seclusion.

Then we’ll figure out what to do next.

Don’t be silly. Whatever gave you that idea?

Would the scum that has risen to the top, when given a dose of their own medicine, sink to the bottom? Let’s find out. Up close and personal.