California Has It, Why Can’t Hawaii?

“There seems to be a lot of pushback and a lot of resistance for something that should be a no-brainer in Hawaii.” — Rep. Chris Lee

House Agriculture Committee Chairman Clift Tsuji killed his third pesticide disclosure bill this year.   Tsuji has single handedly ensured that the public won’t be able to find out details about what pesticides are being sprayed in the state and where.

SB 1037, introduced by Sen. Josh Green passed the Senate but Tsuji thinks he knows better. The measure would have required agricultural companies to submit monthly reports of what pesticides they use and in what amounts.

Disclosure here has run up against fierce resistance from members of the local agricultural industry who called the proposed requirements “burdensome:”. 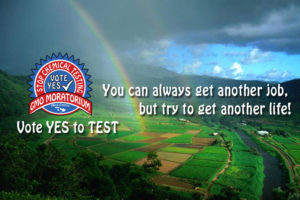 Currently the state collects data on the sales of restricted use pesticides, but not how, when or where they’re applied.

SB 1037, introduced by Sen. Josh Green originally targeted only large farms, reflecting concerns about the environmental impact of large companies like Monsanto that compose the state’s $243 million seed industry.  But Sen. Jill Tokuda from Kaneohe expanded the bill’s applicability before passing it out of the Ways and Means Committee. Tokuda may have set up the bill to fail because Tsuji then said that he was concerned about the bill’s broad application to all farmers and he killed it.

House Environmental Committee Chairman Chris Lee, who introduced a similar bill that also didn’t survive Tsuji’s committee. said that requiring companies to disclose what pesticides they spray would make it possible to conduct meaningful analyses of health problems that have been reported anecdotally in rural areas such as west Kauai.“Without disclosure of what’s being sprayed or in what quantities, we just can’t do that,” Lee said, adding: “There seems to be a lot of pushback and a lot of resistance for something that should be a no-brainer in Hawaii.”

The data collected is mapped and residents can look up their towns to see what’s being sprayed nearby.

A 2011 study by researchers at the University of California at Berkeley used the state’s data to discover that exposure to a combination of maneb and paraquat increases the risk of developing Parkinson’s disease.

A 2014 study by researchers at the University of California at Davis used the state’s pesticide use data to determine that pregnant women who were exposed to several common agricultural pesticides were more likely to give birth to children with developmental delays and autism.

One of the researchers of the UC Davis study, epidemiologist Janie Shelton, said she would recommend a spatially explicit monitoring system in Hawaii where applicators must report “1) what they sprayed (compound and active ingredient), 2) where they sprayed it (address, GPS coordinates, etc.), 3) when they applied it (date and time), and 4) how much was applied.”

Renee Pinel president and CEO of the Western Plant Health Association, a trade organization for fertilizer and pesticide manufacturers, agricultural retailers and biotechnology companies in California, Arizona and Hawaii said that even if the disclosure reports were limited to the largest pesticide users, they’re not necessary because studies by the federal Environmental Protection Agency already illustrate the impacts of pesticides.

But activists counter that that federal agencies have been clearly influenced by industry forces and many loopholes exist that allow the companies to spray in open fields chemical combinations that have never been tested together.

A bill passed two years ago to require the state to make public data about the sales of restricted use pesticides, but the law hasn’t been implemented because officials are afraid the state will get sued.

Anne Lopez, spokeswoman from the state Attorney General’s office, said officials are concerned that companies simply won’t report certain information including what pesticides that are being used and where, even if it’s required by law.

Ashley Lukens, directs the Hawaii chapter of the national nonprofit Center for Food Safety. She said the withholding of data on pesticide use takes concerns “to the level of hysteria.”Lukens supports the Good Neighbor Program, but thinks it should be expanded statewide and made mandatory. “We know that when there’s transparency, the next step is accountability,” Lukens said.

Jim Raelson, a pediatrician from Kauai, says it’s impossible to even begin analyzing whether pesticides are affecting the health of his patients without any data and that the Good Neighbor Program is not enough.

“We’re in a community where a lot of the pesticides are used, there’s every reason to believe that they have a potential of causing problems,” he said, citing an American Academy of Pediatrics report that warned of the dangers of exposing children to certain chemicals. “There is no reason why we should suspect agricultural companies of hiding data from us, nor should we make it a voluntary thing. It should be just a simple obligation of doing business here.”

COME CELEBRATE EARTH DAY 2015   Sunday, April 19, from 10 AM till 6 PM at the Keopuolani Park in Wailuku  Opposite War Memorial Stadium