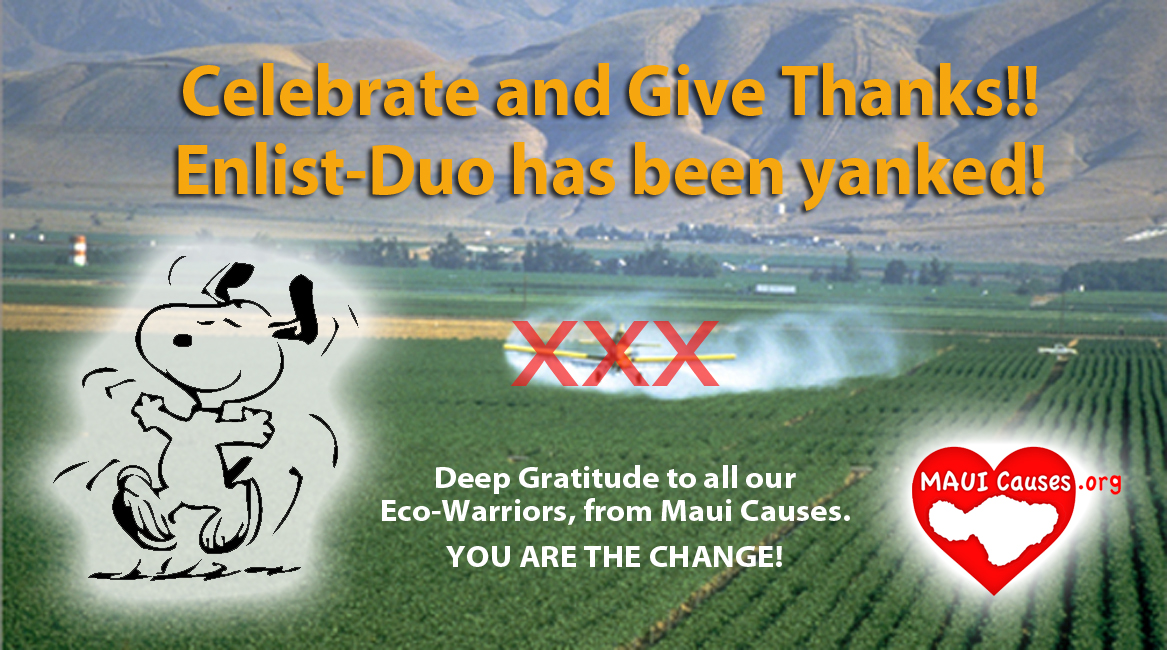 Washington D.C. — The Environmental Protection Agency (EPA), responding to litigation, has announced it is revoking the registration of “Enlist Duo.” Approved by the agency just over a year ago, Enlist Duo is a toxic combination of glyphosate and 2,4-D that Dow AgroSciences created for use on the next generation of genetically engineered crops, designed to withstand being drenched with this potent herbicide cocktail. In its court filing, EPA stated it is taking this action after realizing that the combination of these chemicals is likely significantly more harmful than it had initially believed.
This action resolves a year-long legal challenge filed by a coalition of conservation groups seeking to rescind the approval of the dangerous herbicide blend. EPA had approved use of Enlist Duo in Illinois, Indiana, Iowa, Ohio, South Dakota, Wisconsin, Arkansas, Kansas, Louisiana, Minnesota, Missouri, Mississippi, Nebraska, Oklahoma, and North Dakota, and had intended to approve it in additional areas in the near future.
Earthjustice and Center for Food Safety, on behalf of Center for Food Safety, Beyond Pesticides, Center for Biological Diversity, Environmental Working Group, the National Family Farm Coalition, and Pesticide Action Network North America, had challenged EPA’s failure to consider the impacts of Enlist Duo on threatened and endangered plants and animals protected under the Endangered Species Act. The Act requires that every federal agency consider the impacts of its actions on our nation’s most imperiled plants and animals and seek input from the expert wildlife agencies before plunging ahead, which EPA had refused to do.
“The decision by EPA to withdraw the illegally approved Enlist Duo crops is a huge victory for the environment and the future of our food,” said George Kimbrell, Center for Food Safety’s senior attorney. “We will remain vigilant to ensure industry does not pressure the agency into making the same mistake in the future.”

“With this action, EPA confirms the toxic nature of this lethal cocktail of chemicals, and has stepped back from the brink,” said Earthjustice Managing Attorney Paul Achitoff. “Glyphosate is a probable carcinogen and is wiping out the monarch butterfly, 2,4-D also causes serious human health effects, and the combination also threatens endangered wildlife. This must not, and will not, be how we grow our food.”

Dow created Enlist crops as a quick fix for the problem created by “Roundup Ready” crops, the previous generation of genetically engineered crops designed to resist the effects of glyphosate, the active ingredient in Monsanto’s Roundup herbicide. Just as overuse of antibiotics has left resistant strains of bacteria to thrive, repeated use of Roundup on those crops allowed glyphosate-resistant “superweeds” to proliferate, and those weeds now infest tens of millions of acres of U.S. farmland. Enlist crops allow farmers to spray both glyphosate and 2,4-D without killing their crops, which they hope will kill weeds resistant to glyphosate alone. But some weeds have already developed 2,4-D resistance, and the escalating cycle of more toxic pesticides in the environment will continue unless EPA stops approving these chemicals, and USDA stops rubber-stamping new genetically engineered crops.
“This Thanksgiving, I am thankful for EPA taking this important action to protect people, rare plants, and animals from Enlist Duo,” said Lori Ann Burd, Environmental Health director at the Center for Biological Diversity. “As we gather with our families for the holiday feast, we can all breathe a little bit easier knowing that EPA has protected our food from being drenched with this poisonous pesticide cocktail.”
Judy Hatcher, executive director of Pesticide Action Network, commented: “EPA is taking a step in the right direction, but Enlist Duo shouldn’t have been given the green light in the first place. Too often, GE seeds and the herbicides designed to accompany them are rushed to market without thorough evaluation of their real-world impacts on community health and farmer livelihoods.”