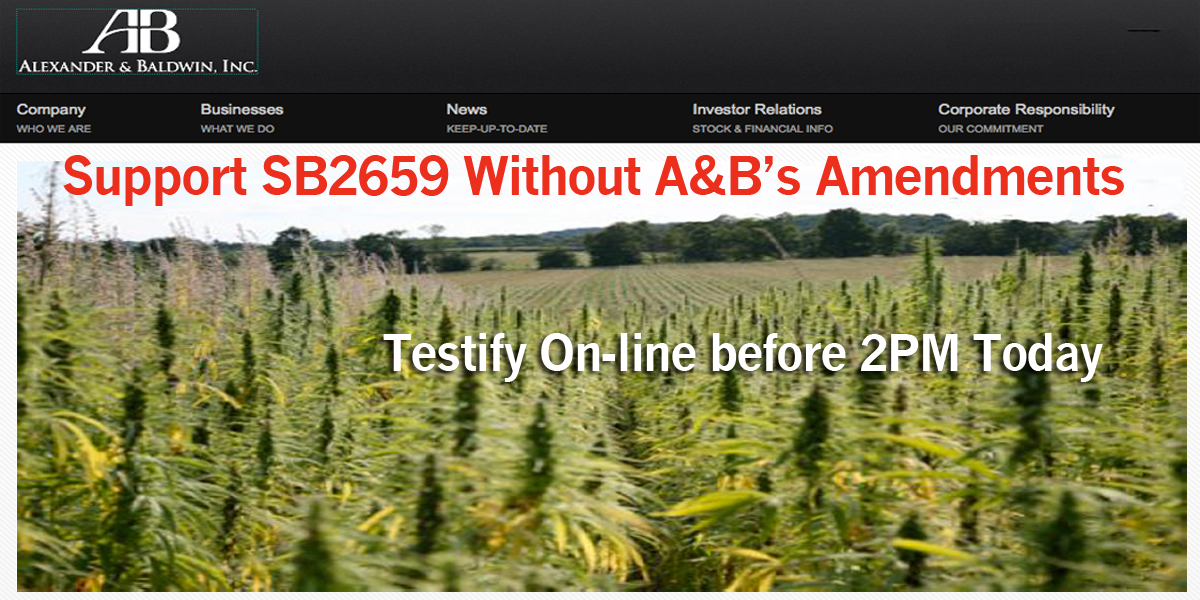 Give your testimony today before 2 PM. It’s not hard. Log in, or create an account at the State Website. http://www.capitol.hawaii.gov/home.aspx
Search SB2659 and enter your testimony. You may want to write it out first and just copy and paste it into the state’s site as there is a tendency for the site to log you out if you take too long writing.

Here’s the testimony page for this bill http://www.capitol.hawaii.gov/measure_indiv.aspx?billtype=SB&billnumber=2659&year=2016

Here what we testified:

I find it absurd and insulting that testimony on Hemp research from A&B would be emphasized by Chairman Tsuji in his referral of this bill.

With all due respect to the institution, Hawaii’s Government has long been measured as one of the most corrupt in America. Who is the face of that corruption? They are sitting in the room right now, look around!

A&B is not a farming operation and knows nothing about Hemp or any other crop research. After years of ignoring it, in Hemp they now see profit potential and they want to own it for their shareholders exclusively, to the detriment of the real farmers and people of Hawaii.

A&B’s subsidiary HC&S also knows little about any real agriculture as they have only ever been engaged in sugar “production”, which isn’t really farming is it? HC&S is run by diesel mechanics not farmers.

Anyone who understands agriculture understands that Hawaii has an extremely wide range of climates and that there are a great number of varieties of Hemp.  A great part of the research to be done is to determine which climate is best for each variety of hemp so that we can maximize the many benefits of this important crop. To suggest that research should only be conducted at one site is ignorant at best.

At worst A&B’s testimony and Chairman Tsuji’s support of that testimony signals an attempt to create an unfair monopoly in Hemp production and they should all be called out for it.

In fact, I will go so far as to call for Clift Tsuji resignation as Chair of the Ag Committee. He has repeatedly abused his position to favor corporate interests that do not serve the larger agricultural community or the people of Hawaii. Tsuji represents institutional corruption at it’s worst.

A&B also testified about making accommodations for a potential increase in THC levels above the Federal limit of 0.3% as a result of growing Hemp in Hawaii’s tropical climate. That Federal limit, though written in law, was arbitrarily chosen and has no functional basis in reality. Across the board, every variety of Hemp has so little of THC in it that one would need to smoke a joint the size of a telephone pole to get high. Though in the same Cannabis family, Hemp is quite different from Marijuana. It’s just like the poppy seeds in your morning muffin are in the same plant family yet different from the poppies grown to make heroin.

Hemp production offers tremendous opportunities for both farmers and the makers of consumer products here in Hawaii and research into how best to grow it here should be pursued as openly, as widely and as vigorously as possible.

A&B and Clift Tsuji can go to Hell.

Think HC&S Would Sell 37,000 Acres to a Local Farm Cooperative? A Plan For Food Production and Jobs, Jobs, Jobs! (Courtesy of  Maui Tomorrow)

Just How Much Corruption is There in Hawaii’s Legislature? If Lobbyists and Legislators Have Their Way We Will Never Know.