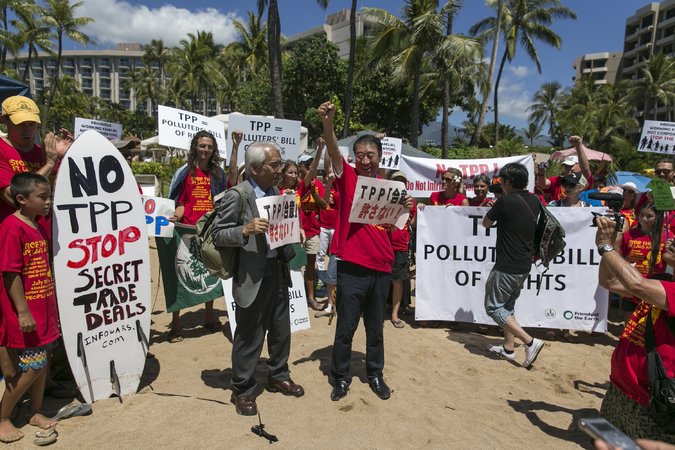 LAHAINA, Hawaii — With 12 nations pressing to conclude the largest regional trade accord ever, United States officials find themselves squeezed between activists pressing to secure access to low-cost pharmaceuticals and Republicans who say Congress will reject a deal without strong patent protections for the drug industry.

Negotiators gathered this week in Maui hoping the long-sought accord might be finished by Friday. But dozens of issues remain unresolved on the Trans-Pacific Partnership, which would link nations like Canada, Chile, Australia and Japan under rules of commerce covering 40 percent of the global economy.

No issue seems to elicit more passion than pharmaceuticals, with both sides using the language of life and death.

“The goal of the pharmaceutical industry is to change the rules internationally, to change global norms with a new monopoly that is cheaper for the companies and stronger,” said Judit Rius Sanjuan, a legal policy adviser for Doctors Without Borders’ medical access campaign, which wants lower-cost drugs on the market faster.

On the other side, Senator Orrin G. Hatch, the Utah Republican who is chairman of the Senate Finance Committee, singled out the next generation of pharmaceuticals, called biologics, and warned on Wednesday that “a strong intellectual-property chapter — including strong patent and regulatory data protections for biologics — is vital to securing congressional support for this trade deal.”

The complexity of the pharmaceutical issues illustrates how difficult it will be to agree on broad trade rules for 12 countries, including giants like the United States and Japan and developing counties like Peru, Malaysia, communist Vietnam and tiny Brunei. United States negotiators are using novel arguments to secure positions. For instance, they are pushing to mandate open access to the Internet as an antipiracy measure, so Hollywood can use streaming videos to completely cut out the often copied DVD.

But medicines remain a delicate problem, and if Japan’s last stand is on rice and Canada’s is on dairy, the United States’ might be on pharmaceuticals.

About 5,600 medicines are in development in the 12 TPP countries, with 3,372 of them in the United States, including more than 900 biologics, which are grown from live cells, according to the Senate Finance Committee. The industry contributes nearly $800 billion to the United States economy each year.

United States law protects pharmaceutical patents for 12 years, allowing drug makers to recoup their research-and-development investments before generic companies can come in with far cheaper versions. Negotiators for the United States say they are obligated to defend American law, even though President Obama has been pushing to shorten the patent protection to seven years.

But Congress can always change that window to conform to trade deals, said Representative Sander M. Levin, Democrat of Michigan and an observer in Hawaii.

“It happens all the time,” he said. “That’s what a transition period is for.”

Countries in the negotiations have windows of eight years or less. Australia has dug in at five.

“I’ve got a mandate for five,” Andrew Robb, Australia’s trade and investment minister, said, arguing that with complex biologics, it takes six or seven years for generic-drug makers to develop what are known as “biosimilars.”

Activists here who cut their teeth during the AIDS drug wars 15 years ago want generic-drug makers to compete with pharmaceutical firms as soon as a drug reaches the market.

James Love, an activist with Knowledge Ecology International, and his wife, Manon Anne Ress, of the Union for Affordable Cancer Treatment, who has cancer, spent the flight to Maui pressing Michael B. Froman, the United States trade representative, to secure access to expensive cancer drugs for people like Ms. Ress, who pays $30,000 out of her own pocket for her drugs now.

Negotiators already seem to be backing away from the hard-line United States position. Observers to the negotiations say the 12-year patent window almost certainly will be scaled back to five to seven years, a move that will anger both the pharmaceutical firms and their allies, and the activists. The Pacific accord is structured so that other countries can join in the future, and the belief on both sides of the pharmaceutical fight is that once 12 nations ratify rules, they will become international standards.

Then there are politics. Australian negotiators simply do not believe that their Parliament will accept any patent protection beyond five years for drug companies that are so dominated by the United States. What left-wing members of Parliament see as price gouging also comes straight out of the government’s coffers, because pharmaceuticals are paid for by Australia’s national health service.

But patent protection is only one issue. Drug companies are also pressing to make the data they collect during clinical trials exclusive and protected. That would require generic drug companies to replicate much of the process that created the drugs they seek to copy. “Data exclusivity” is a more ironclad protection than a patent, because smaller pharmaceutical makers cannot afford to file patent applications in every country they do business in.

And they want access to the extrajudicial tribunals envisioned in the TPP’s investor-state dispute settlement chapter. The tribunals are designed to give investors legal recourse if a government changes policies in ways that hurt the value of their investments.

The United States team is trying to find some middle course that preserves pharmaceutical companies’ ability to recoup their research investments and preserves their incentive to innovate while finding alternative ways to ensure access to drugs. That might mean transition periods for poorer countries that let cheap alternatives in and keep older drugs on the market longer. It could also mean incentives for United States drug companies to invest in TPP countries that accept stronger intellectual-property protections.

The activists have been pressing for much more significant changes, such as a mandatory government fund to finance clinical trials, taking that cost off Big Pharma’s balance sheet. But that approach seems to be a restructuring of the pharmaceutical industry that most negotiators cannot accept.

“There’s been no effort on U.S.T.R.’s part to foster innovation outside the private sector, none,” Mr. Love said, referring to the United States trade representative.

Tulsi Gabbard, Maui’s U.S. Congressional Representative, denounced the TPP this morning on the floor of the House of Representatives