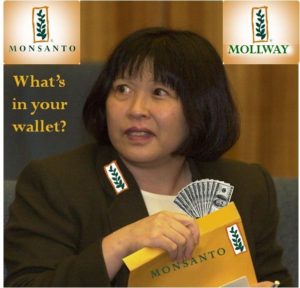 A federal judge says a ban by Maui County on the cultivation of genetically engineered crops is pre-empted by federal and state law and invalid.

Mollway emphasized that the ruling is not a statement on whether genetically modified organisms are beneficial or detrimental.

“The court recognizes the importance of questions about whether GE activities and GMOs pose risks to human health, the environment, and the economy, and about how citizens may participate in democratic processes,” she said. “But any court is a reactive body that addresses matters before it rather than reaching out to grab hold of whatever matters may catch a judge’s fancy because the matters are interesting, important, or of great concern to many people.”

“The court stresses again, so that no lay party has any misapprehension on this point, that it is ruling purely on legal grounds. No portion of this ruling says anything about whether GE organisms are good or bad or about whether the court thinks the substance of the Ordinance would be beneficial to the County.”

Maui voters passed the ordinance when they approved a ballot initiative last November. The measure imposes a moratorium on the growing of genetically engineered crops until scientific studies are conducted on their safety and benefits. The ordinance would only allow the moratorium to be lifted after a vote by the Maui County Council.

Mark Sheehan, one of five citizens who sponsored the ballot initiative, said his group will appeal the order. He expressed disappointment that Mollway ruled on what he called procedural issues instead of addressing the substance of their argument.

He said the ordinance was specifically written to address issues not found in state statue. Further, he said the law requires the county to protect the health of the environment and the public, said Sheehan, who is a member of the group Sustainable Hawaiian Agriculture for the Keiki and the Aina Movement, or SHAKA.

“That was lost on the judge, so we will have to move along and have to find justice for the constitutional rights of the people of Maui at another level,” he said.

The measure imposes a moratorium on the growing of genetically engineered crops until scientific studies are conducted on their safety and benefits. The ordinance would only allow the moratorium to be lifted after a vote by the Maui County Council.

Judge more interested in who’s got authority and her love of Papayas than doing anything about the risk of exposure to dangerous chemicals you suffer everyday. She continues delay, to Monsanto’s benefit.