Antsy audience not so sure that “Lawmakers Listen” 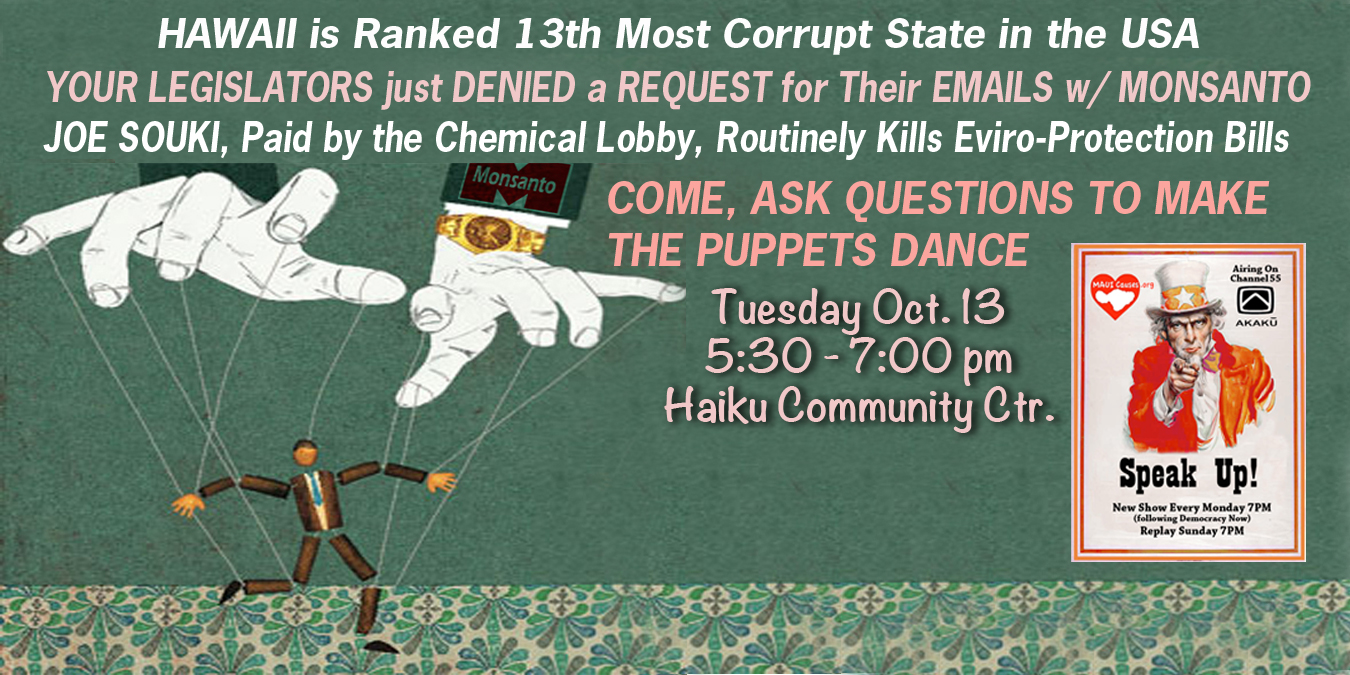 The public meeting at the Haiku Community Center on Tues., Oct 13 hosted by Rep. Lynn DeCoite (D) featured an all star cast of members of the Hawaii State House including all six members of the Maui delegation and five of the top leadership. It drew a good crowd who soon grew restless with the format.House members fielded an array of written questions ranging from coral reefs, to local roadways – as well as many that focused on the GMO initiative, food labeling, water, agriculture and the preservation of open space.

The only applause lines came during the discussion of marijuana as a “cash crop” to replace sugar, where Maui already has a “name brand.”

As the evening wore on the audience grew impatient and frequently interrupted the speakers with comments shouted from the floor.

According to Mike Gagne, a long time Haiku community leader commented this morning via email, “The format while intended to keep order and decorum muted the impact of the questions from the audience. Rep Mizuno (Vice Speaker- (D) Oahu who served as moderator) was trying to condense the questions (or multiples on the same topic) into one question and it was not successful. The audience was frustrated and began to grumble noticeably calling “Just read the question!” to Mizuno.

“The topics of real interest to the audience specifically GMO moratorium, broad use of restricted use pesticides, cane burning and the Public Trust Doctrine were only briefly touched on in a group that overwhelmingly voted in support of curtailing some of these activities until they are proven safe or at least given a fair review by the DOH.”

It was Gagne’s opinion that

“the disconnect was created by having the moderator read the questions (with halting mispronunciations) instead of having the actual questioner ask with their own voice and emotive impact.”

This muted and frustrated the audience.

“As a long term community association president,” he wrote in a follow up email, “ I have learned how to do that in Haiku with contentious issues and it is not similar at all to the legislature’s method. So in the overall I would say that they weren’t listening because they were talking and most people don’t do both well simultaneously.”

“One of the more successful efforts,,” Gagne continued, “came when Rodney Kilbourn spoke up about the acquisition of the Peahi-Manawai lands to the panel. Although it is not their issue specifically there were council members in the audience who heard the message. The consensus is that the County is the first position on the purchase, but in the event the Mayor fails to act the legislators got an earful and will be called upon to do something.

According to Gagne, “The Peahi-Manawai lands comprise about 267 acres of ocean front makai of Hana highway that are currently owned by A&B/Versa Development. The land has been in pineapple for many years. These lands are part of a long anguish in the North Shore community both for how they were acquired, cleared of settlement, and used for farming.

“Now as A&B begins to pull out of their outlying properties the North Shore communities want to see some public good come from the transfer of over 1100 acres from Maliko Gulch to the area commonly referred to as “Jaws” to a private developer. This is a natural area mostly too steep to develop and farm comprising revered cultural sites and land formations which could make National Historic Site status but will at least be kept as reserve for future recreation areas.

“A large part of the block of land comprising six large agricultural lots is being recombined and subdivided for housing as large lots. No Planning Dept review is required according to law which further increases the chill in the community. Not only will there be more people, but the Paia Bypass remains a figment somewhere in the future.

“The pressure,” he noted, “is increasing to do something preservation-wise which may have been apparent at the Tuesday night meeting. There are many forces at work but the consensus opinion is to save it.”

As for other who attended Gagne observed, “Generally, it was an unhappy audience as the meeting progressed. Outbursts became more frequent when the responses to substantive questions were essentially off-topic. People wanted deeper answers than Speaker Joe’s (Souki) US Constitution and Magna Carta comments about The Public Trust Doctrine as it applies to Hawaii.

Indication of audience unrest included media style hand gestures to “speed it up” (fingers go in a circle) or “cut it short” (finger across the neck). House Finance Chair Sylvia Luke got “yak-yak” signals (fingers and thumb flapping like a talking mouth) as the crowd perceived her remarks as long winded. At one point Souki lost his composure and threatened to shut the whole thing down. Unfortunately his remarks did not come across as decisive, they came across mean.

.As for DeCoite, her fellow lawmakers had nothing but praise for first year performance. The Molokai resident who was appointed to the seat on the death of Mele Carroll served in the 2015 session representing the multi- island district which includes East Maui, Molokai and Lanai.

But with the majority of the voters concentrated in East Maui from Paia to Hana and DeCoite’s own affiliation being at odds with some she was appointed to represent, many came away from the gathering wondering if she would be able to hold on to the seat in the next election.

Though the sign on the wall said that “Lawmakers Listen” the MO seemed more aimed at containing the discussion than enlightenment.

For the ten elected State House Democrats who paid a visit to East Maui – this was not their finest hour.

WHO WAS THERE:
On the podium:
The entire six member Maui house delegation attended the event.

Also on hand from the House leadership were

In the audience
A partial list of politically active Mauians who attended the event included:

A wide cross section of the residents of East Maui and their families also attended.

Susan Halas is a freelance writer and guest blogger on MAUIWatch. She has followed Hawaii politics since 1976 when she moved to the Valley Isle and became a staff writer for the Maui News. The long time Wailuku resident is a former Maui correspondent for other local print and digital publications including Maui Weekly.

Our State Can End Homelessness Too